Square eyes: Are kids in the UK watching too much video?

Did you watch the most recent episode of Homeland last night? Maybe you caught up on the new BBC drama Taboo, watched some YouTube clips or just had an evening of chilling in front of Netflix. Whether you viewed any video content or not last night, there is no denying that the way in which we watch video has changed drastically over the last 5-10 years. Long gone are my uni days of watching Neighbours at 5.35pm on a small TV screen in my or a classmate’s bedsit. If I were still watching it now, I could access it on demand and view it on my smartphone during my commute.

But how is all of this media change affecting kids in the UK? How have their habits and behaviors changed with the advent of smartphones, tablets and catch-up services? Our ViewScape data from 2015, which provides a snapshot in time of viewing behavior, includes the viewing habits of children aged 1-17. Parents and guardians were asked to fill in the survey for young children. The survey requested information about the device that content was viewed on and whether viewing was linear or non-linear. The aim? To measure total video viewing across all devices, channels and platforms.

Video consumption: What the data says

When analyzing BARB data relating to 4-11 year olds, we can clearly see the change in traditional linear viewing on the TV set when we compare the figures for January to June 2006 with the same period in 2016. In 2016, people spent half an hour less viewing linear content per day than they did in 2006. Does this mean our kids are becoming more bookish or spending more time outside? According to our ViewScape data, even more video content is being consumed, just in different ways.

Next time you are out shopping or eating at a restaurant, take a look around you at any nearby families with young children. My bet is that a device of some sort will be out to keep the kids quiet – is that Peppa Pig I see? Our ViewScape data shows that kids aged 1-11 consume 2 hours 37 minutes of video daily. This includes any viewing occasion, whether it’s using free online services such as BBC iPlayer and YouTube, or SVOD services Netflix and Amazon Prime Instant Video. With BARB showing that viewing on a TV set for kids aged 4-11 is 1 hour 47 minutes per day on average, we can see that new methods of viewing have significantly increased viewing time. 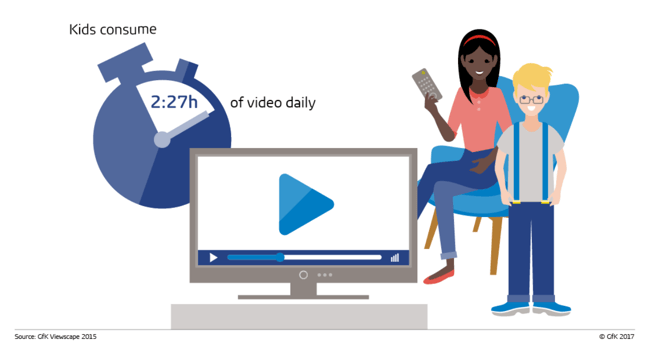 Ofcom’s ‘Children and Parents: Media Use and Attitudes’ report, published on the November 16, 2016, revealed that children’s internet usage had usurped that of viewing on the TV set for the first time. The capability that mobile devices offer has brought the internet age beyond the household and into the outside world, and not just for those of us who are over the age of 18.

For this to happen, of course, access to a device is needed. While a number of young children use a device belonging to their parents or guardians, many now have their own. Tablets are the device of choice for kids aged 1-11, with more than 60% of all those who have access to a tablet possessing their own. On average, kids with access to a tablet device spend 24 minutes per day watching content, compared to 19 minutes and 13 minutes on PC/laptops and smartphones respectively. Brands such as Amazon and Kurio have facilitated this trend with kid-friendly tablets designed to keep children safe and secure from the vagaries of the World Wide Web. 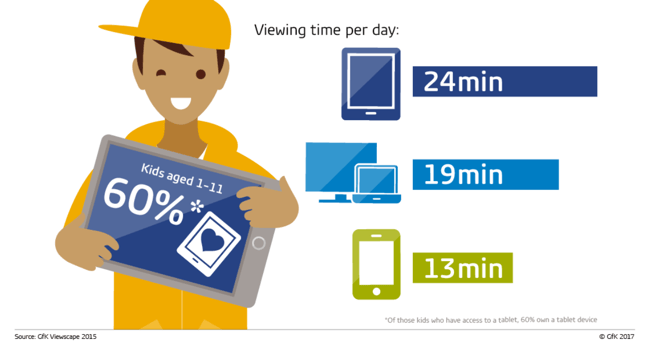 Will kids continue to embrace these new, emergent behaviors as they move into adult life, or will they revert to a more traditional method of viewing on a TV set? Either way, it is clear that video viewing is increasing because of the media proliferation that has occurred. While it would be easy to conclude with the notion that watching more video content will cause kids to fry their minds, who’s to say that this trend won’t increase their intelligence? If it weren’t for YouTube, I would not have a clue how to install a washing machine! Let’s just remember to keep a balance in our lives and those of following generations. Too much of anything is bad for you, apparently.

Nigel James is a Senior Research Executive at GfK. To share your thoughts, email nigel.james@gfk.com.