When Netflix released Stranger Things mid-way through July 2016, few people would have predicted the scale of the show’s success. Within its relatively short life span, Stranger Things (a series that is part of the ever expanding list of Netflix originals) has been celebrated by critics and Netflix users around the globe, by bringing a (perhaps, up until its release, slightly less fashionable) sci-fi TV format to TV screens in 2016, without losing any of the charm that people associate with the classics of that genre.

Many commentators have speculated that the show would appeal to those who love the sci-fi classics of the 80s, as well as introducing the genre to new audiences, so we decided to look at our SVOD tracker data to see who exactly is watching this show.

Who is watching Stranger Things?

Firstly, let’s look at the profile of those watching the show: 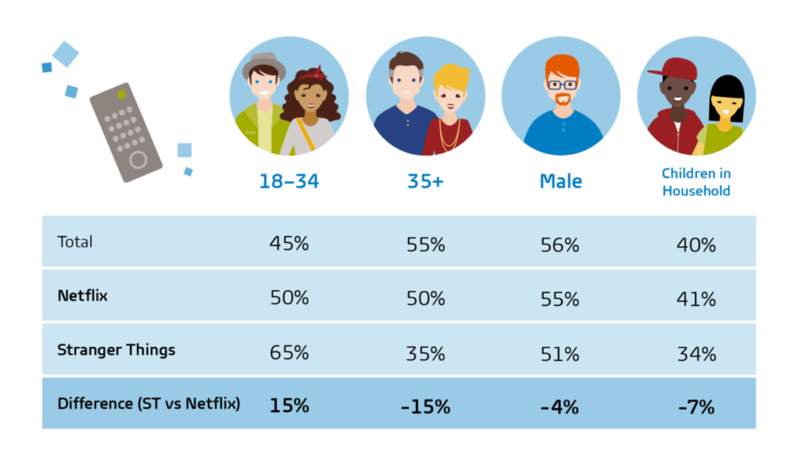 Compared to all Netflix users, the Stranger Things audience tends to be younger (they are more likely to be in living in a household with parents and other siblings, but less likely to have children around) and the appeal to both genders is more evenly balanced compared to other shows.

Looking at age, 65% of those watching Stranger Things were 18-34. In fact, Stranger Things has one of the youngest audiences compared to any other major Netflix Original (with the exception of Making a Murderer, which has similar gender and age splits). This could be influenced by the subject matter of the two shows (sci-fi vs politics) but also perhaps because Stranger Things is a less familiar (and in a way, newer) format in today’s TV landscape, which could have triggered interest amongst younger users.

It should be noted that these younger audiences are also more likely to consume video content on connected devices other than the TV screen.

How was it watched after release?

After being released on July 15th 2016, Stranger Things became a hit almost overnight. Even though it was only available for half of the month, it was the 3rd most streamed title in our SVOD tracker in July ’16, moving up to become the 2nd most streamed title in August ‘16. In September, the show was still the 2nd most streamed title, only ranking behind Narcos, which had released the 2nd season of the series at the beginning of the month. The release format that Netflix uses, releasing an entire season’s worth of episodes at once, is highly conducive to binge watching. 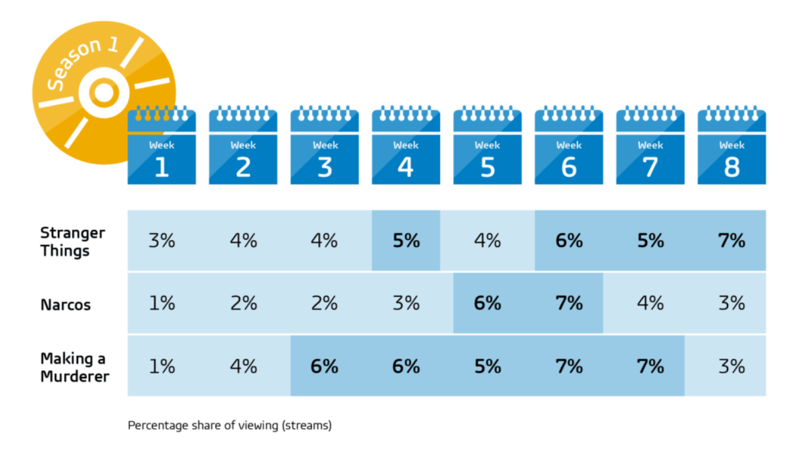 Among those that binge watch shows, Stranger Things has the highest proportion of people streaming 4+ episodes, proving that people have been bingeing heavily on this series in the first weeks of its release.

When asked to rate the program on a scale of 1 to 10, in terms of viewing satisfaction, Stranger Things (with a score of 9.0) delivered slightly better content ratings than other shows on Netflix (whose average score is 8.5). However, it is worth noting that Narcos and Making a Murderer also scored a 9.0 average content rating, which shows that Stranger Things is in-line with other recent Netflix Original releases on this measure (the average content rating for Netflix originals is 8.8).  Could they be listening to feedback from their audience to make more enjoyable programs?

Stranger Things has been a success for Netflix – the data in our SVOD tracker shows this, but the announcement that Netflix have already commissioned a second series is clear evidence that this is true. In my opinion though, the key success of this show was that a higher proportion of younger users (16-34s) seem to be engaged with this title.

If Netflix is to continue successfully expanding globally, it will need to make sure that it retains the attention of this audience, especially in a market where new video services are launching every day on a variety of devices, and vast sums of cash are invested into original content to try and capture market share. Having said that, if Netflix keeps successfully producing new program formats (or reviving old favorites), then they have a good chance at cementing their position at the top of the SVOD market even further.

Christopher Smith is a Senior Research Executive at GfK. To share your thoughts, please email christopher.smith@gfk.com.

Consumer Behavior: datapoints to watch and why