Energy efficiency: the rise of the ‘A’ team in domestic appliances

Picture the modern, Connected Consumer: they can use their smartphones to turn down the heating at home if the sun comes out. They can pay bills online and check their bank balance. They can even monitor their home energy consumption via an app at any time of day or night.

With this level of on-demand updates and control – not to mention high energy prices and constant news stories on the need for environmental action – it is no surprise that consumers are increasingly conscious of their personal energy use.

In this blog post, we take a look at the current landscape for sales of the most energy-efficient major domestic appliances (MDAs) across Europe, together with what factors are driving or hindering sales in the different countries.

Modern focus on energy efficiency is reflected in the number of MDAs that people across Europe purchased last year that were rated as A+++ or A++ (the two highest bands for the most highly energy efficient appliances; rating run from A to D).

Just short of half of total number of washing machines, tumble dryers, dishwashers, coolers/refrigerators and freezers (the “MDA5”) sold across 25 European countries were from the two highest classes for energy efficiency. The A++ appliances alone accounted for a quarter (25.6 percent) of all appliances sold, while the top-rated A+++ appliances accounted for a fifth (21.7 percent).

There are, however, significant differences between different countries. Germany, for example, is significantly ahead of other countries - with well over two-thirds (71.1 percent) of all MDA5 appliances bought in that country last year being A-rated. Compare this to Ireland and Great Britain, where the figure is only just over a quarter (27.3 percent). 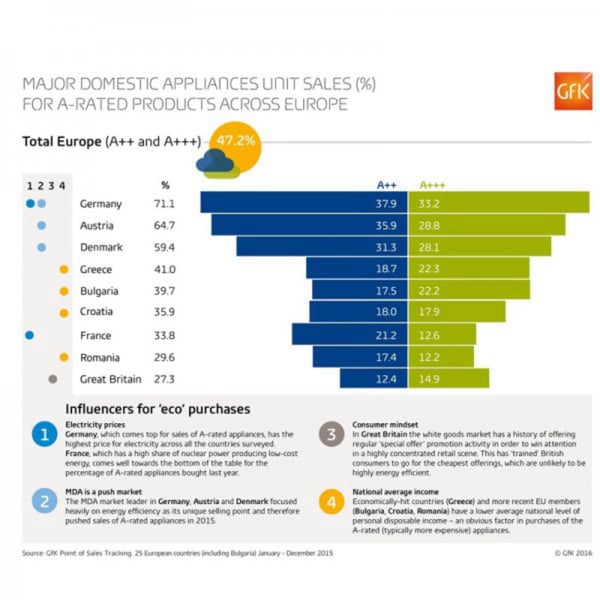 What is influencing ‘eco’ purchases in the different countries?

The most obvious factor influencing purchases of energy efficient appliances is the cost of energy in each country.

Germany, for example, which comes top for sales of “better-than-A+ rated” appliances, has the highest price for electricity across all the countries surveyed, apart from Denmark – which lies third. By contrast, France, where there is a high share of nuclear power producing low-cost energy, comes well towards the bottom of the table.

We should also consider that the MDA sector is a “push” market, rather than a “pull” market. What we mean by this is that the items that manufacturers produce and that retailers offer determine what consumers will buy (compared to, for example, the smartphone market, where the shorter product lifecycle and fast turn-around means that consumer demand for certain features drives what manufacturers produce).

Over the last decade, the MDA market leader in Germany, Austria and Denmark focused heavily on energy efficiency as its unique selling point - and therefore pushed sales of highly efficient appliances. This certainly played a strong role in producing the significant lead that Germany showed last year for its purchases of such appliances compared to other countries. It will be interesting to watch whether Germany maintains this level of lead during 2016.

Another factor in country differences over purchases of “better-than-A+ rated” appliances is each nation’s consumer mindset. In Great Britain, for example, the white goods market has a history of offering regular ‘special offer’ promotions in order to win attention in a highly concentrated retail scene. This has trained British consumers to go for the cheapest offerings, which, by nature, are unlikely to be highly energy efficient.

The average national level of personal disposable income is also an obvious factor in purchases of these appliances, since they are typically more expensive. This is certainly a factor for the MDA purchases in economically-hit countries such as Greece, as well as the more recent EU member countries, such as Bulgaria, Croatia and Romania. This is reflected in the fact that they sit in the bottom third of the table for percentage of energy-saving appliances being bought.

Inside the minds of... Gen Z Consumption