In our recent global study, we asked people in seven countries to say which technologies they felt would have an impact on their lives in the next few years. Eleven leading edge technologies were on the list –including wearables, connected cars, 3D printing, the Internet of Things – but it was smart home technology and mobile payments that stood out, with half of people internationally believing that these will impact their lives in the coming year or so.

While numerous brands are already launching smart services and products for the home - on an almost daily basis – the plethora of devices could actually be confusing consumers. Even though nine in ten people say they are aware of the smart home concept, relatively few claim to know a lot about it – and one recurring trend that we see in our study is that people’s interest and appetite was amplified when we stopped talking about the general concept ‘smart home’ and instead described particular areas that smart home technology can enhance. 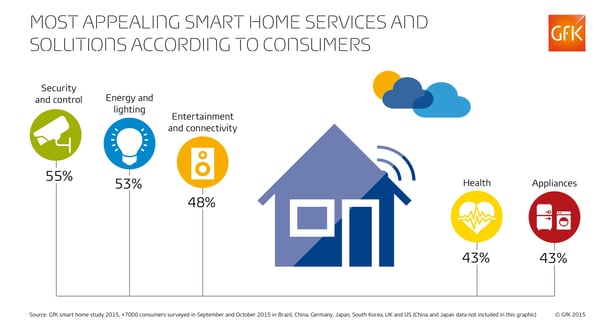 When we give people tangible examples of the kind of areas within their home that smart technology can enhance – such as security and control, energy and lighting, domestic appliances – their interest levels rose. And when we took that further, by testing specific applications and use case within each of those areas, the appeal is higher once again. Giving consumers that additional understanding that (for example) smart home energy control could translate into things like Smart Thermostats and what those do, or what it might mean to have a smart washing machine in the home really helps them understand what smart home technology could mean for them.

This suggests that brands should focus their messaging around displaying the benefits of smart home technology through tangible in-home applications. On top of that, people are likely to respond better to the ideas of building incremental connectivity and making their home smart(er) piece by piece, rather than by suppliers trying to sell a fully integrated smart home offering immediately.

For the smart home market to really take off, brands will need to partner and work together.

To help develop smart home technology into a truly mass market opportunity, brands should also look for ways to promote the additional value that this technology can deliver, by linking the different smart devices to other areas of consumers’ lives. For example – could 2016 be the year that insurance companies offer lower premiums for people who have smart sensors and IP cameras in their home, linked up to a smart alarm? This kind of value generation will help to really drive forward interest and likely take up as consumer can see the broader benefits of adopting smart home technology.

GfK interviewed over 7,000 adults aged 16 and over in Germany, UK, USA, Brazil, South Korea, China and Japan, with interviews conducted online. Respondents were recruited to be nationally representative of online users in each market. Fieldwork was carried out in September and October 2015.

Who will triumph in China’s wearables market?

The devil wears smartwatches: Why fashion brands are sizing up the wearables market