Why mobile is the new web

The mobile revolution: it’s one of the most talked about phenomena in consumer technology. Yet advertising spend on mobile is still far behind use and the number of eyeballs that might see it – and we all know that advertising needs to follow the users to be effective. So what’s causing this lag and how can we help address it?

In March 2015, almost two thirds (63%) of connected Germans were accessing the web from their smartphones1. In fact, with, according to our Crossmedia Link panel-based solution, 67% share of time spent online based on people using both devices in Germany on smartphones and the remaining portion on desktop, it’s true to say that the internet is mobile. And that statement is especially true for younger people aged 14-29. Three quarters (74%) of their time online is spent on mobile phones, compared to 52% of the time spent online by those aged 55 and over. And they aren’t just using web browsers when online – 87% of mobile use is app-based. Yet, despite this, the lion’s share of ad spend, a whopping 1.58bn Euros, went on online display. Only a fraction of this, a comparatively paltry 134m Euros, went on mobile advertising2. So what is the reason for this huge mismatch in advertising spend?

One explanation is that effective ad planning is dependent on being able to evaluate and accurately measure advertising’s impact, and that, until now, this has been a challenge. At GfK, however, we have devised tools and techniques to measure both browser and app-based web activity on mobile phones. The panel-based solution GfK Crossmedia Link has enabled us to understand what sites people are visiting from their mobile phones and how long they are spending on different activities. 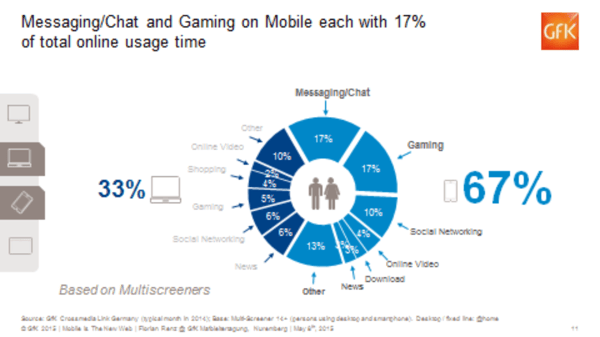 For instance, we know the top three smartphone “killer apps” in Germany are WhatsApp, Facebook and YouTube – and we know their net reach and the average number of visits per person per month. We can also see the long tail of other apps that are used and begin to understand the ecosystem for apps in Germany.

Our IAB prize-winning approach, “GfK Facebook Data Link”, will be shared in our session at Dmexco on 17th September at 11am. It has allowed us to delve even further into mobile ad effectiveness and to establish the impact mobile ads have on key metrics including sales uplift. For this project we worked with the Facebook specific ID which is identified in GfK Crossmedia Link. Objective is to analyze the exposure to ad impressions on Facebook across all devices. When we combined their Facebook ad exposure with their purchase data we achieved a true view of the impact of Facebook paid media campaigns. Using a number of FMCG campaigns, the approach allowed us to show that mobile advertising is driving sales – both online and offline.

In our session we’ll also explain more about the Facebook project and how a combination of desktop and mobile cookie panels can help advertisers assess also brand uplift. Our case study, “Talk to Google”, illustrates our three-step process to analyzing media channel effect perfectly.

We hope our approaches and case studies will reveal the true impact of mobile on reach, brand awareness and sales.