Wearables and payment – what’s the deal?

Modern shoppers have an array of payment options available to them, with the recent addition of Apple Pay users are offered the option to pay for goods and services via the use of an Apple iPhone 6 or smartwatch. Along with other wearable accessories such as Barclays bPay which features the ability to pay for train tickets, coffee or even a meal with just a wristband or key-fob. There is a growing trend in which consumers are looking for the fastest, most efficient payment method for all scenarios.

Paying for an item using a watch or a band allows users unrivaled efficiency and freedom. Due to the devices not requiring the user to carry a wallet or a purse the advantage for those on-the-go is impressive, for example joggers are able to purchase a drink mid-run without taking cash along with them. Many devices provide a top-up service which allows the user to effectively budget and transfer funds between accounts and devices, this reduces the risk of users being out of pocket if their devices is lost or stolen. A feature which is popular with adults and children alike.

In a survey conducted recently 32% of smartwatch owners and 41% of intenders view using the smartwatch to make an in-store purchase as being efficient and allows them to be in control and up-to-date. 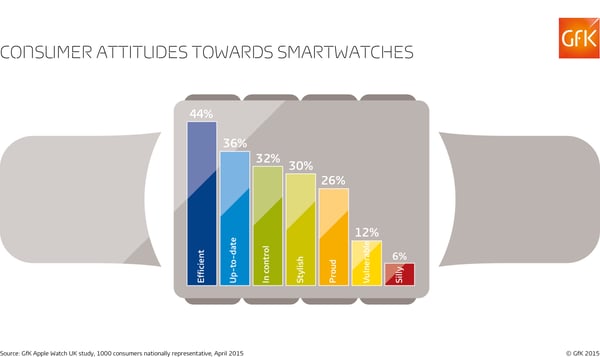 The same group also viewed using the smartwatch for other features such as making calls or browsing the internet favorably. However the appeal for using the smartwatch to pay for items in store is much lower than other uses such as viewing maps and getting directions (68%), reading mobile notifications (61%) and controlling appliances in the home (55%). 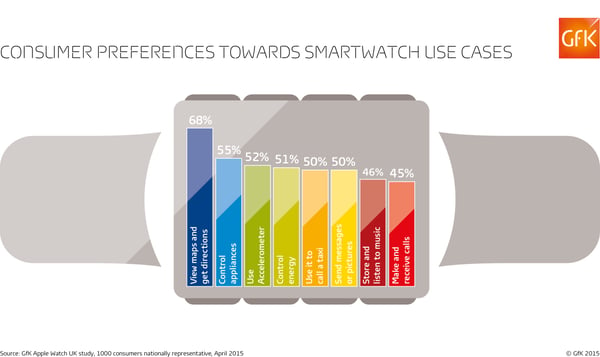 A gap is apparent in the confidence of user groups in relation to using the device for certain everyday situations. 45% of smartwatch rejecters portray using the watch to make or receive calls and making in-store purchases as ‘silly’, the same group also think that the smartwatch is less efficient for these situations as well. Those who own a smartwatch are also more ‘proud’ to use it to make in-store purchases.

The rejecters of smartwatches however have shown that they look favorably on using the device for features which involves interacting with appliances and other technology devices at home, 45% show that they feel ‘in control’, They also feel less silly and anxious than in other situation outside of the home. Many recognize its potential efficiencies and usefulness for controlling lights, heating or media and it’s this feature of smartwatches that could prove to be pivotal when attracting laggards and the older generation.

The future of wearable tech and payment options is certainly one which has a bright future, with a wide range of features and practicality the products and services currently on offer appeal to the masses. However will the perception of users looking silly and feeling out-of-place when using the devices put consumers off purchasing? The notion of security may also be an issue among many, with fewer security features consumers may feel anxious or at risk using the devices. However, if manufacturers are able to establish methods to overcome these barriers, could this be a larger step towards having a cashless society?

What’s the future for mobile payment?

What’s in store for the future of retail staff?