British drivers give muted response to the connected car

The connected car will be a reality within a few years, as enhanced safety, economy and entertainment become standard features of most new vehicles. So how do the British feel about the car of the future?

In this extensive global project carried out at the end of 2014, we interviewed 5,800 consumers in six key markets – Brazil, Germany, China, Russia the UK and USA – to find out what the future really looks like for consumers, automotive manufacturers and the wider supply chain. We asked Britons about their attitudes towards driving now and their thoughts about expected future innovations.

Fears about security, accidents and other drivers saps the joy out of driving for British drivers

Out of the six countries in our survey, British drivers enjoy driving the least. Less than half (43%) tell us that they feel happy when driving. So what are the pain points that British drivers suffer? The biggest concern is around expensive gas, oil or petrol (43%). The second biggest concern is also expense related – the cost of expensive servicing, repairs and maintenance (33%). Almost one third (30%) are concerned by dangerous or aggressive driving behavior or by expensive insurance.

There are some differences for Leading Edge Consumers - a group of early adopters and influential consumers. For this audience, car theft and security and car damage at the roadside is more of a concern compared to all consumers, while the cost of fuel, serving and insurance less so. Looking at worries around “Self oriented” attributes, Leading Edge Consumers are more worried about feeling tired when driving, and wasting time in traffic. 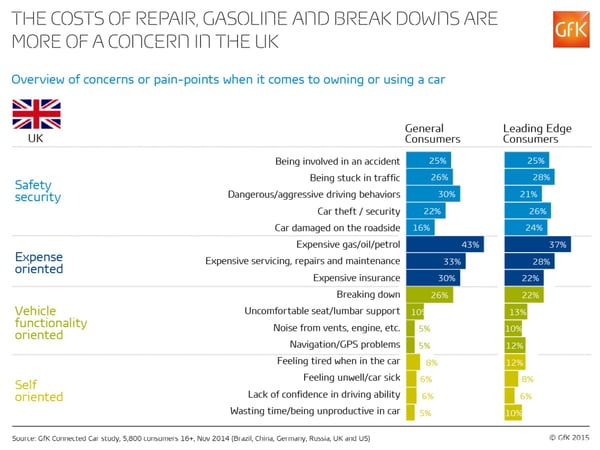 British drivers preoccupied with safety concerns rather than aesthetics

Safety/security and freedom are, without a doubt, of prime concern for British drivers. When considering what they wanted from a car, they seek value for money most, followed by wanting to feel safe and kept safe, fuel efficiency and durability – all to the same degree. Unlike drivers in Russia and Brazil, British drivers are significantly less concerned with lifestyle issues and do not seek a car to enhance their well-being or provide gratification over other things. In this respect, British drivers typically have a more functional relationship with their car than drivers in other markets who may be more image conscious.

When we look at Security, Gratification, Well-being and Freedom as an index, we see that Security and Freedom rank equally highly. If we take Security as a hygiene factor, it is needs around Freedom - that includes value for money, durability and fuel efficiency - that manufacturers of tomorrow’s car will want to ensure they meet. 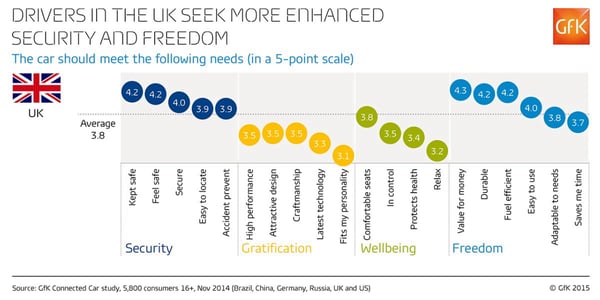 Attitudes towards connected car features are relatively muted amongst British consumers. With the exception of in-car CCTV, all of the features in our survey receive lower than average interest amongst British consumers than for the other countries. Furthermore, some of the proposed capabilities of the connected car make British consumers feel particularly powerless and anxious. Whereas the prospect of autonomous driving is welcomed as a benefit in some markets (most notably Germany and Russia), the response in Britain is somewhat more polarized: with a third of consumers say that the concept makes them feel powerless and 28% feel anxious.

Of the seven new concepts that the connected car offers, UK consumers rank “Ultra Safe” as the most appealing (45% extremely/very appealing - a car that connects with other cars and has integrated safety cameras). But with less than half of respondents seeing the appeal of this feature, the UK lags behind all the other countries in our survey in terms of interest. “Data Tracker” (a car that tracks usage, runs diagnostics and records accident data) is the second most popular concept amongst UK consumers at 33% top 2 box. With even the most popular concepts achieving such a muted reception, Britons have a much more reserved reaction to the connected car concepts than other consumers in our survey.

Get our Connected Car report:

Gavin Sugden is Divisional Director Technology at GfK in United Kingdom, he can be reached at gavin.sugden@gfk.com.

Download our free preview report or get the full insights in our global report, which is available to purchase now. It contains detailed market-by-market analysis and brand specific insight. For your definitive guide to the road ahead or any further information, contact us.

For more about our offerings, visit our Automotive pages.