Will the apple watch live up to expectations?

The Apple Watch launched on 24 April 2015 retailing at a minimum of £299 (€320). At first glance, it looks easy to use and control through its digital crown and intuitive touch screen. Apple prioritized key features and applications like maps, weather, notifications, Siri, making/receiving/diverting calls and tracking health/fitness information while not forgetting that watches are designed to tell time and fit on the wrist. Despite this clever design, Apple enters a category that has generated limited sales to date and faces the challenge of living up to the hype and replicating the success of the iPod, iPhone and iPad.

Apple’s work is cut out for them

As with past device launches, the Apple brand generates curiosity about the category. Nearly half (46%) of all respondents say they heard or saw something about the Apple Watch launch in the news and this rose to 53% of Apple Fans and 58% of current smartwatch owners. Moreover, while two-fifths overall (39%) say they are interested in the Apple Watch launch, more than half (54%) of Apple Fans are interested in the launch. And, while there is limited interest in getting a smartwatch, there is interest in seeing what Apple will deliver as 57% of those considering buying a smartwatch say they are delaying their purchase until the Apple Watch becomes available. Ultimately, it is up to Apple to define its own success and motivate Apple Fans, but, Apple has a strong starting point as the majority (68%) of those interested in the launch think that the Apple Watch “will change the way we use wearable technology.”

Increasing understanding and changing perceptions of the category

Apple Fans are largely positive, but there is a lot of work to be done to change perceptions and increase understanding of the smartwatch category among the general population. Reactions to doing everyday tasks with a smartwatch are mixed. The idea of using a smartwatch to do things such as unlock/lock your front door, control appliances, make/receive calls and make in-store purchases leaves some feeling empowered, but makes others feel somewhat ridiculous or even vulnerable.

When asked about using a smartwatch to make and receive calls, a sizable number of respondents (41%) say they would feel “silly.” This sentiment increased to 58% among those who claim they disliked Apple. However, of those with an interest in the launch, about half would feel “up-to-date” (46%) making/receiving calls on a smartwatch. In addition to feeling self-conscious, a number of respondents also questioned the security of using a smartwatch. Overall, a third or more say that using a smartwatch to lock and unlock their front door (33%) or make an in-store purchase (37%) would make them “vulnerable.” 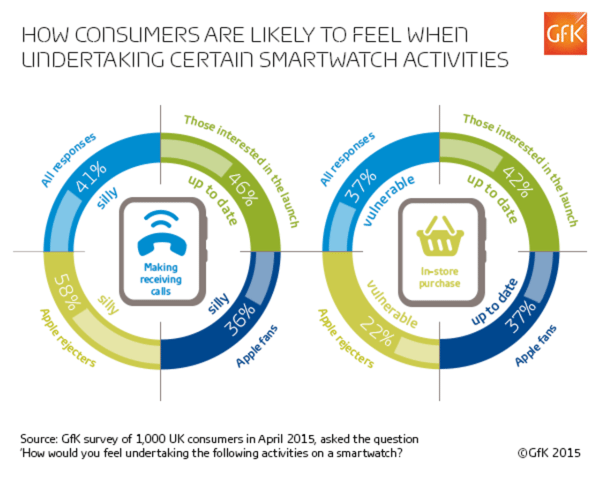 Beyond gauging emotional reactions to using a smartwatch to do everyday tasks, the study also examined perceptions around some potential features available on smartwatches. The top five features include: viewing maps and get directions (68%), reading text/email notifications (61%), controlling appliances at home (55%), monitoring a workout (52%) and the ability to customize the design through different watch faces and straps (51%). 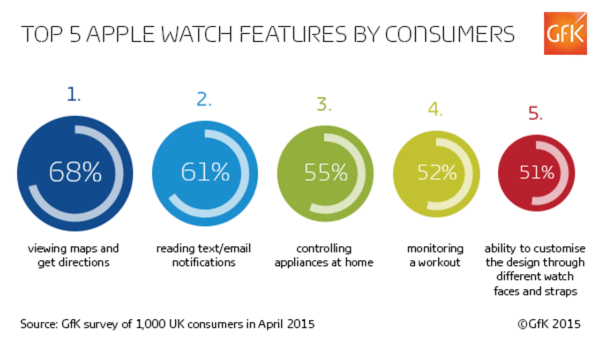 It is worth noting that Apple prioritized a lot of these features in its design and that Apple Fans, those interested in the launch, and current smartwatch owners agree that these are the most important features for a smartwatch.

While Apple must create enthusiasm for a device that occupies a relatively low interest category, it looks as though Apple have once again designed a device that prioritizes features and functionality without compromising on look and feel. Apple generated a huge amount of interest in this product launch, but it is too early to say whether they will create another significant category or whether their smartwatch will be an appealing gadget with a more limited market that consists of Apple Fans and those with a strong interest in new technology.

5 tips to measure brand performance in the new abnormal