The differences and similarities in the german and austrian tire markets

Are the German and the Austrian tire markets actually as similar as they might seem? This was a central question that Martin Faißt, International Marketing Manager Automotive at GfK in Germany, sought to answer in his recent presentation at the AutoZum automotive industry gathering in Salzburg, Austria.

Both countries share the same language, for instance, but it is exactly here that differences can be unveiled. Look at the date of the AutoZum show: It took place in the month of January – or Jänner, as the month is called in the Austrian dialect; In Germany's version of German, that would be Januar. Faißt used such subtle differences (and some similarities) as a lens for better understanding the Austrian and German tire markets and what impacts the tire industry in both countries.

In both Austria and Germany, sales in the winter season 2014 were much lower than the year before, which can be attributed to mild temperatures and low rainfall, said Faißt. Retail panel data from past years show that when sales are low in October and November, they do not pick up in the following winter months.

Tire manufacturers need to adapt their production, logistics and business practices for this for the later winter months: Initial data indicates that sales in, or the number of tires dealers bought, were solid in 2014. However, initial sales out data for winter tires shows that tire dealers are still sitting on high stocks, which will have an impact on their demand to buy tires in the following high season in 2015.

Despite the decline in sales year on year in both countries, the markets showed some bright spots in feature segment developments, Faißt said. “In both countries, we have a clear trend toward larger tires. In Germany, where we have historical data for more than a decade, we see that unit sales of tires below 16 inches made up more than three quarters of the market in 2005. Since then, this segment has been shrinking. It reached 44 percent share in 2014, while sales of tires between 17 and 23 inches grew steadily.” Similarly, unit sales of tire sizes above 17 inches also rose in Austria, while sales of smaller tires also shrank. 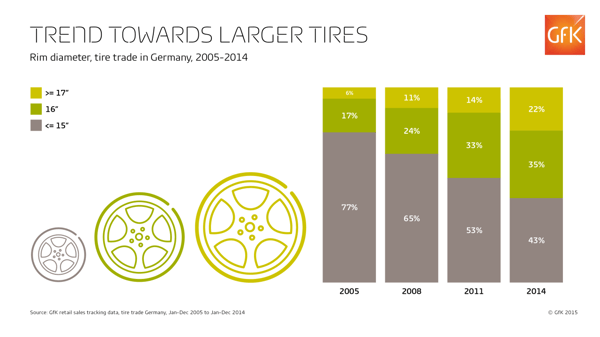 Rising sales for larger tires are not the only similarity between the markets in Austria and Germany. For instance, segmenting the market by tire dimensions shows that tire sales are becoming more fragmented and tire manufacturers need to offer a large range of tires to cover all car types. 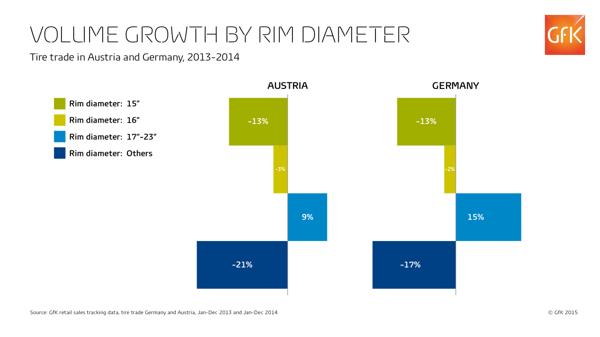 Also, EU labeling laws which require more disclosure on fuel efficiency have triggered the sale of more fuel-efficient tires in both countries because consumers now have fuller information when making a choice. This trend indicates that manufacturers can improve sales by introducing more efficient tires.

Differences between Germany and Austria

At the same time, the market share of 4x4 tire sales in Austria is higher than in Germany, with 6 percent and 4 percent, respectively. Austria is among the few European tire markets where 4x4 tire sales have shown little growth, since four-wheel drive technology was taken up widely years ago in the alpine country.

"Launching a large and energy-efficient all-season tire in Germany may be a promising investment. However, the very same tire may find little acceptance in Austria, where all-season tires are of less interest,” Faißt said.

To understand the differences between seemingly similar markets, manufacturers need to dive deeply into multiple market segments in both markets. Gathering knowledge on just one market may help companies get an understanding of a related market. However, just as seen with the month of Jänner (or Januar), the devil lies in the detail. 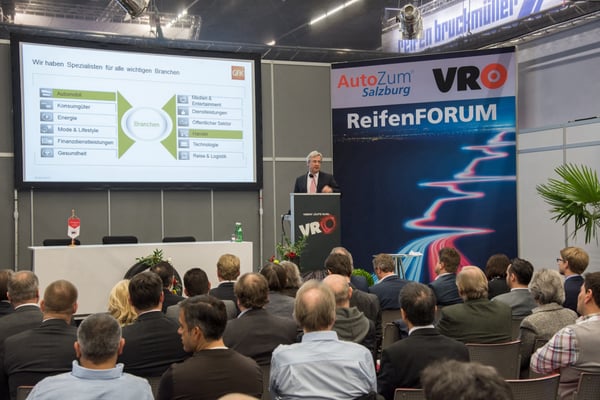 Martin Faißt is International Marketing Manager of Automotive at GfK in Germany. To gain further insights from our presentation at AutoZum contact us.