Tackling the barriers to mobile payment

With nearly three out of four consumers globally (71%) having access to the internet via a smartphone, retailers would be justified in thinking that the time is finally right for people to pay for goods and services via their mobile phone. However, in our study* of 17,000 consumers carried out in 17 countries, we identified that just 5% of transactions are made using a mobile device. Although cash and cards are still used for the majority of transactions (46% and 45% respectively), there is enthusiasm to pay via mobile. In this article we investigate the appetite to pay by mobile and the two key barriers – the two “Ts” of trust and technology – that are preventing widespread adoption.

28% of global respondents currently make mobile payments two to three times a month. Although this represents just a fraction of transactions overall, it does show that there is significant potential to achieve more widespread adoption. Appetite and use is far higher in Asia Pacific where 17% of people pay by mobile four to ten times a month, one third (33%) two to three times a month, and almost half (46%) during a six month period. By comparison this last figure is nearly double the number in Western Europe (24%). 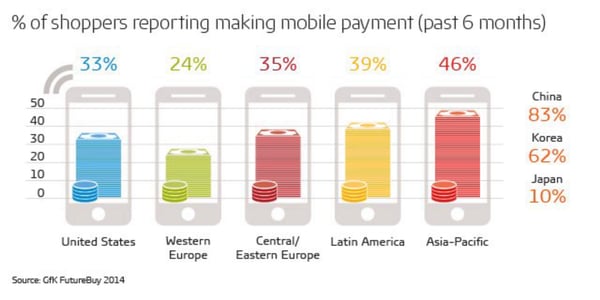 27% of consumers say that they prefer to make payments with their mobile wherever and whenever possible.

In a group we have identified as “Leading Edge Consumers” (LEC = early adopter, influential, passionate about shopping**), there is even more appetite for m-commerce. Seven in ten of this group (69%), say their mobile device is quickly becoming their most important shopping device, and 72% are looking forward to being able to make more transactions this way. Mobile payment is particularly important in stores. According to our research, one quarter (25%) of all mobile payments made globally were in a shop.

Yet despite these positive sentiments, the fact remains that only a small number of payments are actually made by mobile. So how can retailers meet consumers’ needs and overcome the barriers that are preventing people from paying via their phones?

A question of trust

There is also concern that personal information could be compromised by mobile payments. More than one half of respondents (57%) worry about this when using a mobile payment app. LECs (69%) and younger respondents (58%) score the highest here, suggesting that while they are keen to embrace the concept of mobile payments, they are also more alert to potential pitfalls and lack confidence in the security offered. Retailers need to tackle this if mobile payments are to gain greater traction.

Lack of adoption of the technology by merchants is another barrier to use for a significant number of consumers. One third of consumers would like to make more mobile payments but are prevented from doing so by the small number of merchants offering it. This frustration is significantly higher amongst younger consumers (41% of those aged 18-24) and almost twice as prevalent amongst LECs where the figure rises to almost two thirds (62%). Retailers need to catch up if they are to tap into the segment that is technologically and attitudinally ready to embrace the mobile payment phenomenon. This is particularly pressing as these consumers tend to lead the widespread adoption of new technologies by other consumers.

Our research shows there is significant appetite to use mobile payments amongst all ages and that consumers can see the benefits of a quick and seamless payment process. Trust and technology are the two biggest barriers to be overcome – and by understanding people’s concerns globally, all players in the value chain can help mobile become an important future payment option. The big question is: when will it happen and what will be the turning point?

** To define someone as a Leading Edge Consumer, they must qualify on at least two of the three categories – early adopter, influential and passionate about shopping. LECs = 15% of the sample identified in the GfK FutureBuy survey via proprietary questions and analytics.