3D printers go mainstream: UX may be the key

I was excited to see Hoover partner with MakerBot, to allow people to 3D print their own vacuum cleaner accessories. It’s another brand that’s embracing maker culture; the mix of technology and DIY that’s starting to move from a group of enthusiasts to a mainstream audience.

But if you’re interested in designing your own parts, or something else from scratch, how easy is it to go from idea to product? I decided to take a look at the user experience (UX), and give two in-browser tools, Tinkercad and 3Dtin, a try.

Even though both of these tools are aimed at the beginner 3D market, I had some reservations that it would still be cumbersome to create a 3D model, but I wanted to be proved wrong. Admittedly, I haven’t tried to use 3D modelling tools for a few years, but I remember a painfully steep learning curve. All of the tools I tried required too much effort to design, and I ended up using cardboard for my models instead.

When you open Tinkercad for the first time, a set of tutorials begin. These ask you to use the tools to create shapes, helping to teach the basics in a hands-on way, and are satisfyingly quick.Panning and rotating around objects is easy to navigate with a mouse, but it’s pretty painful to use the on-screen buttons alone – this leaves me with some questions about how a touchscreen or tablet version could work. The toolbox does contain a set of shapes, which is helpful - including letters and numbers - and these can be resized, combined, and subtracted to make your design. I was put-off that there are no drawing tools, but my attempt to model a narwhal still managed to progress, right up to sending it to print through the partnered 3D print services. 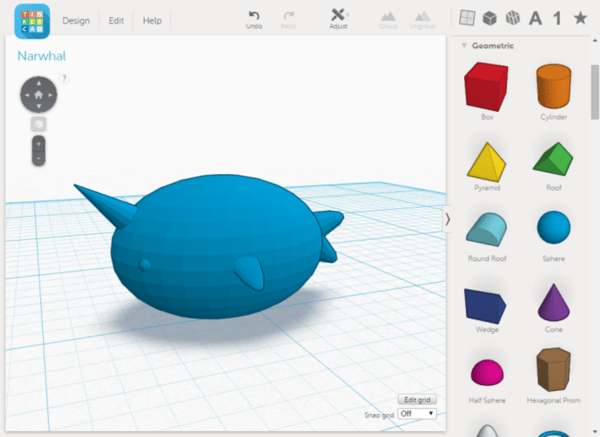 At this point, I realized I’d built the whole thing without paying attention to how big it was going to be – millimeter measurements are easy to ignore. It would have been useful for some indication of scale (like a coin) to be in the drawing area from the beginning. Still, it was impressively intuitive and easy to use.

I moved on to look at 3Dtin. The immediate difference was the YouTube tutorial, rather than a hands-on one. These could have been explained in a more straightforward way (at one point the video instructs: “the geometry always moves in a principle plane that is perpendicular to the direction along which we are watching”). 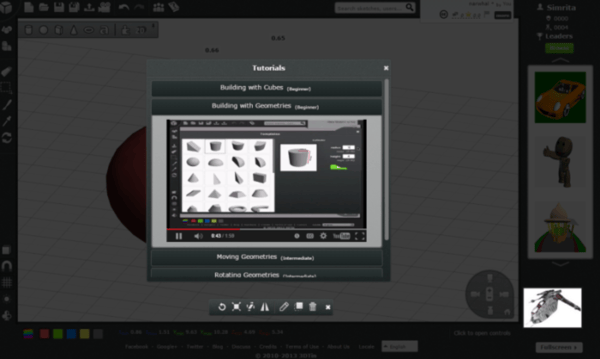 Similar to the other application, there’s a helpful toolbox of ready-made basic shapes, but it feels less hands-on. It requires resizing and rotating using sliders, rather than directly manipulating the objects. Another difficulty is having the same mouse button for Move and Rotate. This resulted in accidentally shifting objects (in my case, knocking off the narwhal’s eyes from its body several times).

While both tools are far easier to use than expected, they still pose some of the same challenges for a beginner 3D modeller; offer intuitive looks at the model from different angles and help to add shapes ‘on’ the surfaces of their model. Both challenges may stem from trying to represent a 3D object on our flat computer screens.

The next set of 3D modelling tools might be able to overcome this. Although missing out on Kickstarter funding, the virtual reality project Sixense’s MakeVR shows that we’re close to putting a person’s design directly in their hands. Using a virtual reality headset brings the object to life and allows people to pick up and manipulate things like we do with the real objects.

What’s next for these tools and what will it take for them to become more mainstream?

Whatever direction 3D printer applications are headed, it will be interesting to see how these tools develop, and whether they are able to attract a larger audience.

Finding and fixing user pain points is going to be the key to creating more user-friendly 3D design tools. An improved UX of these applications will help encourage wider participation - taking them from the domain of specialists, to something the average person can use and enjoy.

And as they become easier to use, more of us might start making, hacking, and tinkering with the products around us.

Simi is part of the User Experience team at GfK; contact her at simi.shaheed@gfk.com.

How to avoid pitfalls in understanding your 3D customers