The constant changes in today’s digital world are revolutionizing the retail experience, for both consumers and retailers. Consumers can now shop virtually any time, anywhere and for anything. But with new possibilities and new technologies comes a thirst for even greater change and innovation. Here, we concentrate on Leading Edge Consumers and what they can tell us about the future of shopping.

Leading Edge Consumers (LECs) are made up of three different types of shoppers: Early adopters, Inﬂuentials, and Passionate shoppers. 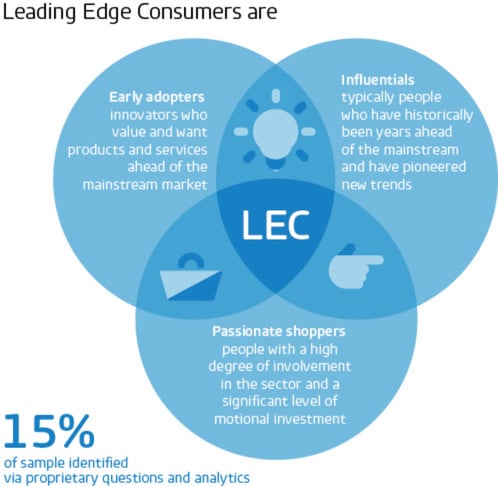 Within GfK’s FutureBuy study, 15% of respondents globally were identiﬁed as being LECs. Drawing on this data, we are able to offer signiﬁcant insight into the future of shopping for both retailers and their consumers.

LECs are signiﬁcantly more wired than their peers 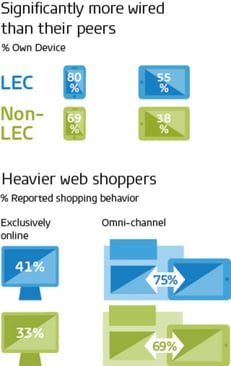 LECs are less loyal than the mainstream

While the trend towards online shopping, as suggested by the behavior of LECs, potentially offers signiﬁcant cost savings to retailers, data from GfK FutureBuy suggests that the transition from store to online comes with great risk in the form of reduced customer loyalty. LECs are typically less loyal: three quarters (76%) are less loyal to any one retailer compared to 58% of respondents in general and 76% are less loyal to any one brand compared to 57% on average. These ﬁgures suggest that there is likely to be considerable pressure on loyalty as shoppers become increasingly connected and transfer more of their activity online.

LECs enjoy assistance with their purchases

Alongside this move away from retail loyalty comes the notion that LECs are more likely to respond positively towards a brand or retailer that assists them with their purchase: 78% say they would be more loyal to a brand or retailer who gave them input on a purchase, compared to nearly half (47%) of respondents overall. This suggests the potential to foster positive relationships within the online environment, but brands will have to work hard to connect with consumers online and earn their loyalty.

Like many consumers, LECs are attracted to making savings and will most likely opt to use the internet to compare prices and ﬁnd money off coupons. 55% compared prices across stores and 43% use coupons from manufacturers’ websites compared to just 20% of non LECs.

LECs are nearly twice as likely to share information about products and services via social media (44% vs 24% for non LECs). This high incidence of sharing means that there is huge potential for LECs to become “power consumers”, whose experiences are shared immediately with an online audience and will inﬂuence the purchasing behavior of other similarly connected consumers.

While LECs typically fail to see the relevance of bricks and mortar retail environments – 72% say that they can see a future where traditional stores are not a big factor in their shopping compared to 41% of non LECs – it is important not to overstate the importance of this trend. Our survey shows that while the future of shopping is changing, and the LECs give many important clues as to its direction of travel, we believe that for the large majority of consumers, an omnichannel shopping experience will remain key.

Consumers will be able to customize their unique shopping experience depending on what they are buying and when, fusing the best of the online and offline environments to meet their speciﬁc needs.

To learn more about our FutureBuy study findings read our article on The blended shopping experience.

Three Ways to Stay Lean and Avoid the UX Bubble