The verdict is unanimous: Prepaid cards are the fastest growing segment of the card industry.

However, despite the time and devotion spent by card companies on innovation, product design, awareness, and usage, there remains a cloud of negative perception and potential misinformation surrounding prepaid cards. There is no question that there are enormous opportunities for prepaid cards both in the US and abroad, providing payment options to specific demographics, such as; unbanked (who do not qualify for a traditional checking account), government agencies looking to improve efficiencies by issuing reloadable cards for benefits and entitlement payments, employers who wants to reward or incentivize employees, and parents, who want to be able to monitor their children’s’ spending habits.

Prepaid cards are not without controversy. Typically perceived as being marketed to and used by the less affluent and unbanked populations, prepaid cards have a reputation for requiring exorbitant fees and for balances that disappear before the card is ever used for a purchase. Because of these perceptions, prepaid cards have been the target of consumer advocacy groups that have tried to change the way cards are designed, regulated, used, and marketed.

Prepaid cards’ primary value proposition is that they are much more convenient, more secure, and easier to use than many other payment methods. Being able to make purchases without the use of cash, or paying bills without a check cashing service, is a big draw for the less affluent. But what is the value proposition for more affluent households? Are they even using prepaid cards? And if these cards have such high fees, why is the number of cards being issued growing at such a high rate?

To better understand the usage, value proposition, and satisfaction with prepaid cards in the US, GfK surveyed 1,000 consumers using its proprietary KnowledgePanel®, which is a probability-selected internet panel (recruited initially through mail addresses) that is representative of the US population. The panel captures cell phone-only households, as well as the 25% of the US population that does not have Internet access, by providing those panelists with a laptop and an ISP.

In order to capture the entire branded prepaid card market, the study included:

The survey was designed to gather insights into the overall usage of the types of prepaid cards, what consumers are using the cards for, the benefits of using prepaid cards, and relative value versus other available methods, including; cash, traditional checking and check cashing services and satisfaction. Of the 1,000 consumer surveyed this May, nearly 60% had used more than one prepaid card in the last 12 months, with the majority of respondents using gift cards, rewards cards, and prepaid debit cards. The 18- to 24-year-olds used prepaid cards the least (8.4%) in the past 12 months, and the 50-64 year old group had the highest level of use (24.6%). Slightly over 57% of respondents indicated that they had used more than one type of prepaid card in the past 12 months, with only 3% indicating that they used only one type of prepaid card.

The income distribution of prepaid card use showed that perception is not always reality, with the highest usage (44.5%) being among consumers with incomes above $75,000 a year. The lowest income bracket actually recorded the lowest rate (13.5%) of prepaid card usage.

Despite their less-than-favorable market perception, prepaid cards recorded high satisfaction across all income brackets when looking at the top two box scores, fluctuating between 67% and 72%. This is great news for the prepaid card industry; in fact, the lowest income bracket (under $25,000 annual income) indicated the highest satisfaction, at 72%. The 50- to 64-year-olds had the highest satisfaction ratings at 75.3% across the age group distribution.

We also asked respondents to rate prepaid branded cards in terms of value compared to various other traditional payment methods, including checking, check cashing services, and cash. The results were more than interesting.

Among the lowest income bracket, 76.2% stated that prepaid cards were a better or equal value to traditional checking. This could be an indication of dissatisfaction with monthly service charges or overdraft fees associated with traditional checking accounts.

These findings are a very strong indicator of the value that prepaid cards bring to the market – both the wealthy and less affluent, the young and the old. 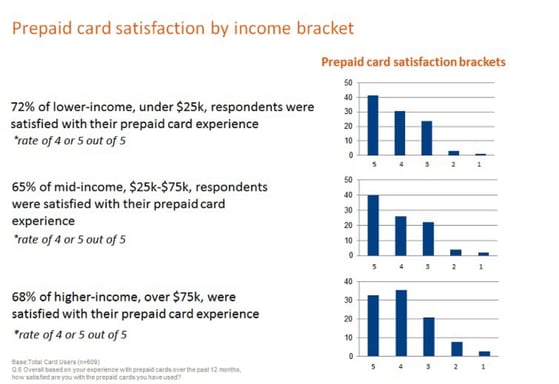 Out of the seven benefits categories included in the study, “ease of use” and “flexibility” were cited the most across all income levels. The affluent (incomes over $75,000) chose ease of use more often than other income groups -- which ties back to the more affluent consumers using their cards more often for everyday shopping on food, gas and clothing.

“Flexibility,” “locations accepted,” and “financial security” are valued features among the lowest income bracket; all were indicated more often by this group than the other income levels. This corresponds to the less affluent consumers indicating at a higher rate that they use prepaid cards as a safe, secure way to spend money and pay bills.

Despite some clouds of negativity, prepaid cards have found a home in US consumers’ wallets and are fulfilling a need across all income levels and age groups. The ability to offer a means to make purchases online and off has positioned prepaid cards as a secure way to save and spend, pay bills, and budget. With their wide array of potential applications, prepaid cards have exceptional growth opportunities in a variety of areas.

Tim Spenny is Vice President on GfK’s Financial Services team in North America. He can be reached at tim.spenny@gfk.com.

A version of this post has been published in the August 2014 issue of Quirks.

How to keep shoppers in FMCG loyalty card programs in Europe