Emerging markets set the pace for technology devices in 2015

Ask many companies what will be the most attractive market for their technology devices in 2015 and don’t be surprised if the default answer is China. But it’s time for sellers of these products to carry out a slight recalibration of their targets. Our new data reveals that India has grabbed the lead from China as the biggest growth market over the coming year.

China is still high on the wish list, of course with 2015 sales estimated to be US$200.8 billion compared to India’s US$34.8 billion. But market size is one thing. It is the year-on-year growth rates that really merit a closer look. India is set to experience a significant rise of 16% driven primarily by smartphone sales, where both volume and pricing will contribute to an overall technology device growth of nearly US$5 billion in 2015.

While China’s admittedly massive market will see only 1% rise, countries such as Nigeria, Pakistan, Vietnam and Bangladesh are looking at much-healthier rates of 13%, 15%, 11% and 13% respectively.  Together, these 10 markets alone will increase by a notable US$10 billion, with the worldwide market as a whole staying flat at US$1trillion — unchanged since 2011. 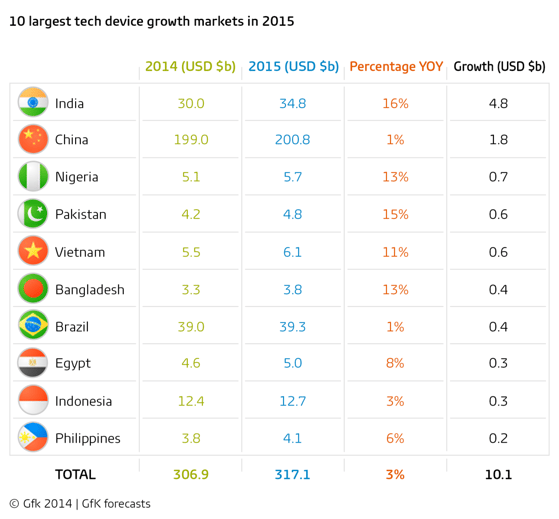 It’s all about smartphones

Although these figures are based on 70 different digital devices, including PCs in the broadest sense, TVs and cameras, this is really a story about smartphones. Globally, smartphone sales are still impressive, with a predicted 8% leap in volume during next year. But then drill down to country level and, as the table shows, there is a significant shift in which countries will offer real growth opportunities.

India again takes first place. Nor should this come as much of a surprise: it accounts for more than a sixth of the world’s population, and is set to be the most populated country by 2025. Significantly, in this context, more than half of its population is under the age of 25 and over 65% under 35: a prime target for sellers of clever technology devices in general and smartphones in particular.

India is not alone in offering such potential. China is still a big player, but what’s more interesting are the seven new entries in the top 10 smartphone markets in terms of growth by value. These emerging markets such as Indonesia, South Africa, Pakistan and Nigeria have replaced developed markets such as the US, Japan the UK and Germany as the value drivers. 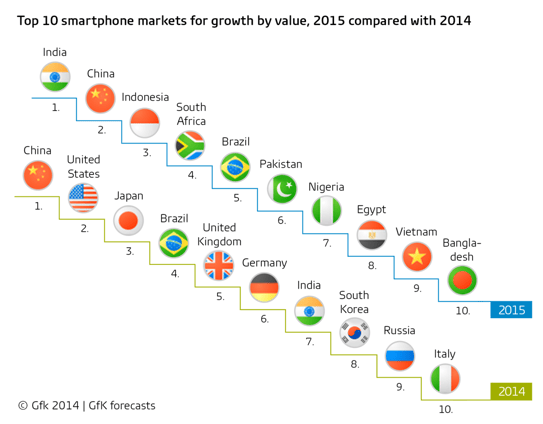 Why? Apart from the fact that the developed markets have hit saturation point, pricing plays a big role. A decade ago, when feature phones were first introduced to these markets, they became affordable to the vast majority of annual incomes on US$1-4,000 when the basic phones hit the US$30-50 price point. New purchasers could rationalize spending what could be a month’s worth of disposable income to be able to connect with other people.

Ten years on, it’s a similar picture. Those in that same income range now find smartphones more affordable as these devices reach that symbolic US$30-50 range. We also see clear evidence of consumers willing to accept a price jump when they upgrade from a feature phone to their first smartphone.

This obviously has implications for the feature phone market, with sales forecast to drop by a significant 20% in volume and 3% in sales. Sellers of these more basic phones will still enjoy respectable sales in some regions, however, with growth the Middle East forecast to be US$5.1 billion and Africa US$4.3 billion.

The new battleground for brands

The global brands which dominate the developed markets in smartphones in particular and technology devices generally would do well to start scrutinizing their strategies carefully. They need to ensure that they not only have the right plans in place for targeting these developing markets, but fine-tune them to accommodate the different demands and needs of each country. One size does not fit all.

This will be particularly critical in the bigger emerging markets, as indigenous providers are gearing up to grab share with some very attractive offerings. So these markets look like being the new battleground for the big names in smartphones. And there’s all to play for.

Read The Telegraph’s coverage of our forecasts.

Over-the-air TV is on the rise

Getting Past the Sentiment: Archiving Our Lives

The first three steps to getting your online pricing decisions right