Picture this: a smartphone that satisfies all your photo needs

The growth of smartphone ownership has impacted sales of digital cameras, with the low end particularly facing decline. Yet while smartphones have succeeded in putting a camera in every pocket, this has not completely wiped out the need for a dedicated camera device.

Today, in the era of the ‘selfie’, smartphone usage is increasingly popular for updating social media statuses and documenting day-to-day events and movements by uploading photos in real time. With multiple functions conveniently packaged into one standalone device, manufacturers have adapted to such consumer behavior by developing photo-capturing technologies in smartphones to offer accessible and easy-to-use digital camera-like functions. These include offering competitive picture quality, filters and editing options that can then easily be shared on social networking sites at the touch of a button.

Understandably then, as smartphones introduce increasingly-sophisticated photography functions, digital camera sales have significantly declined. Digital camera sales were down 40 percent in 2013 from their peak in 2010*, highlighting a disruption pattern also evident in other categories (such as in the portable gaming market); when the equivalent experience on a smartphone improves at a faster rate than the standalone device, we’re less inclined to purchase one.

Yet despite the leaps and bounds made in smartphone camera quality, over 50 percent of consumers** still own a digital camera…..but why? 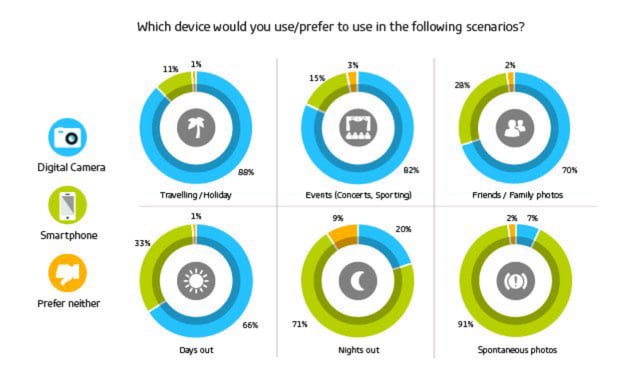 As demonstrated above, research we conducted in the German and UK markets*** highlight that smartphones do not satisfy all photo-capturing opportunities. The quick-to-hand nature of the smartphone unsurprisingly sees it as the preferred device for capturing spontaneous moments on-the-go, yet despite improvements in smartphone-camera quality, digital cameras were still found to have a significant role in documenting holidays and events – moments that are largely considered to be planned, special or unique.

But in today’s snap-happy world, just capturing a shot isn’t the end of the photo’s journey.

Smartphone users tend to favor smartphone devices for transferring photos to another device, adjusting camera settings before taking a photo, sharing photos via SMS, e-mail or instant messaging. Younger audiences in particular tend to use smartphones for editing photos, applying filters and sharing photos to social media, again a nod to the quick success of the likes of Instagram and Snapseed.

Demand from younger age groups for photo-editing tools will continue to put pressure on smartphone market leaders to consider how they can enhance their offerings in this area and clearly communicate photo enhancing features to this age group. Beyond this, market leaders must diversify their offering for quality and precision photography to increase their market share. Standalone digital cameras continue to dominate the market for quality and precision, an area where smartphones tend to fall behind.

Digital cameras retain their demand for satisfaction of overall image quality with 83 percent of users preferring cameras to phones. Whilst 60 percent of users are satisfied with offerings from their smartphone, image quality is something that must continue to develop in order to expand opportunities for growth.

Despite their more basic nature, smartphones have changed the way photos are captured and shared by offering real-time photo sharing and convenience photo taking, resulting in the popularization of selfies and sending photos via photo-messaging services such as Snapchat, behaviors not typically associated with the standalone digital camera.

However, in an increasingly competitive and saturated smartphone market, there is still significant scope for manufacturers to identify key differentiators in the photography space. This could be through innovative photo-enhancing features or through maximizing the quality and precision of photos in order to better compete with standalone digital cameras.

Smartphones have succeeded in putting a camera in every pocket, but in order to win over their consumers and claim the majority of market share, manufacturers must make their quick-to-hand pocket camera offering more specialized, capable of precision photo capturing, improved image quality and usability to cater for the needs of their consumers.

The spread of non-cash payments: a shift change in the way we pay for goods and services

What’s the future for mobile payment?

Wearables and payment – what’s the deal?