Tire retail sales. What's going on in the Middle East? GfK conducted widespread face-to-face interviews within retail outlets in key markets to get a pulse on the market. GfK’s retail audit process consists of monthly data collection from shops that are specially selected using a stratified sampling methodology.

What did we learn about marketplace dynamics and customer behavior for tire retail sales in these regions?

The market in numbers

In the UAE, we found a total of 1,050 tire outlets, with the majority of retailers in Dubai. In the Kingdom of Saudi Arabia, where the total number was 3,357, the greatest concentration was in the western Region. In Egypt, Alexandria was found to contain 14,000 automotive retail outlets, where greater Cairo had just 2,319. 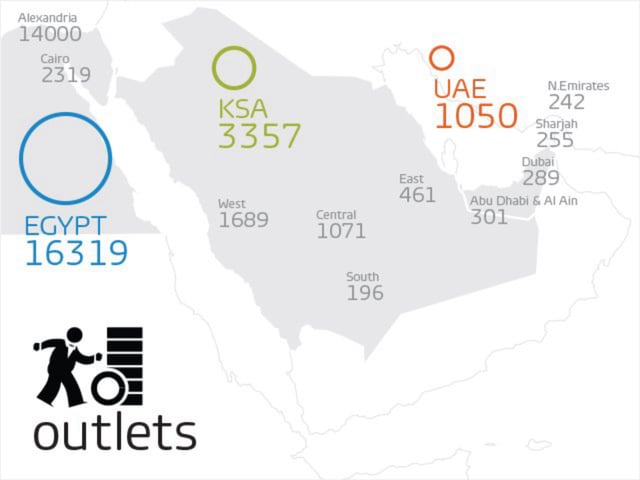 Getting to grips with UAE

The market in the UAE is divided between Dubai, Abu Dhabi & Al Ain, Sharjah and North Emirates. Dubai contributes the highest sales in both volume and value, with 32% and 35%, while the corresponding figures for Abu Dhabi are 30% and 29%. There is a clear link between disposable income and sales, as shown by the Dubai figure of 284 tires per month per shop, compared with 254 tires per shop per month in Abu Dhabi. Other influencing factors include lower pricing, a higher number of available tire brands and Stock Kept Units [SKUs]. Dubai’s premium car numbers also impact its share of the whole country’s sales. 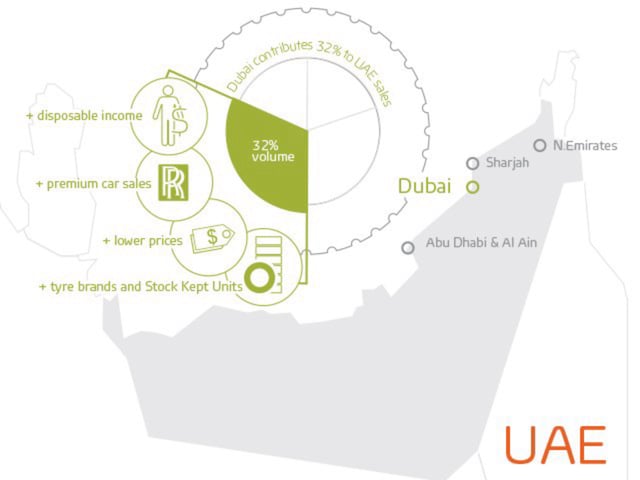 Insights for the Kingdom of Saudi Arabia

Saudi Arabia has a distinctive and varied market profile. The western region has by far the largest concentration of tire retail outlets, both for value and volume. Light truck sales represent 72% and the passenger figure car is 53%, although it’s interesting to note that 4x4 tire sales are higher in the central region because of the high per capita income of people living there. Another distinction is the eastern region, where overall sales are not especially high, yet sales per shop are highest of all. Our study revealed that this is due to the area's close proximity to Bahrain and Kuwait.

Our retail sales tracking focused on two main urban centers in Egypt: Alexandria and greater Cairo. Alexandria was found to have 14,000 relevant retail outlets, compared with Cairo’s much smaller total of just over 2,300. Using the data collected over the four-month study, it’s estimated that Egypt’s whole tire market will number 2.7 million sales for the first four months in 2014.

The graph shows market share of the different tire sizes in the three Middle Eastern countries studied. <=15” is the main contributor with 45% in volume and 28% in value in UAE. Dubai has a high percentage of <=15” while larger tires like 18” and 19” sell higher volumes in Abu Dhabi, compared to Dubai. Average sales of larger-inch tires are higher in Abu Dhabi as compared to all other regions. With more muscle cars (American cars, e.g. Ford Mustang) in Abu Dhabi, the share of larger-sized tires is much more obvious there. In Saudi Arabia, similar to UAE, the maximum contribution in terms of feature is from the <=15” followed by the 16” and the 17”. The sales of the larger rim diameters, such as 18” and 19”, are higher in the central region, compared to the west. 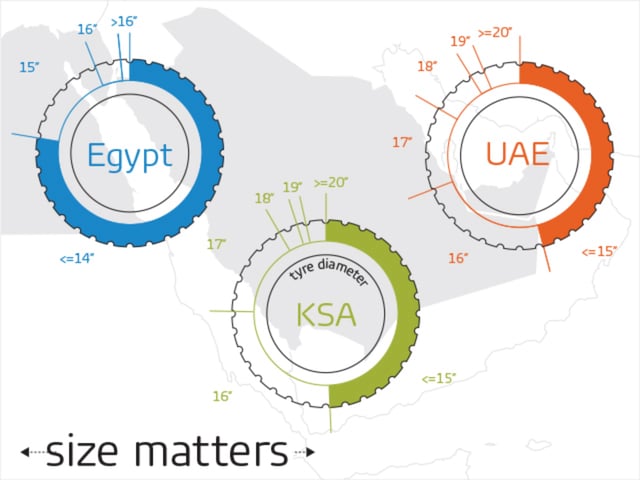 GfK conducts the retail study on a monthly basis across the three key regions of the Middle East. The report’s detail and granularity help to fine-tune focus on the right sizes and pricing strategy to target end consumers. This is a key advantage in a market that experiences major fluctuation. Now pricing can be regularly tracked and the ‘five Ps’ of successful marketing – product, place, promotion, price and profit – can be fully exploited.

Get the study in full

To gain the full insights and benefits from our detailed study of the Middle Eastern tire market, contact Prachi Satoskar, Business Group Manager Automotive Middle East, GfK.
For more about our offerings, visit our Automotive pages

5 tips to measure brand performance in the new abnormal

How to maximize the power of premium buyers in challenging times