EN
back
2
min read
share this page
Media and entertainment

If you’re already tired of people talking about mobile, you may have to wait a long time for relief. We are in a once-in-a-generation technology inflection point, as both smartphones and tablets accelerate their growth.

These devices have made mobile Internet and media use easy, maintaining seamless connections through mobile data services and WiFi connections, and bundling content in user-friendly apps. Mobile devices are becoming more and more indispensable to their users because they offer an “anytime” ability to be connected to friends, entertained, communicate, and do almost anything, anywhere. And they are becoming more and more important to marketers because of their ubiquity in consumers’ lives and activities.

According to new trends[1] from GfK’s The Home Technology Monitor®, households with smartphones have almost doubled in the past three years, and now stand at 64 percent of all homes. Households with tablets have increased six times in the same period, up to 38 percent of homes. The speed of adoption for tablets is particularly notable, as it is currently setting the pace for the fastest adoption seen in our ownership survey in its 34 years – outpacing the previous benchmarks by a clear margin. 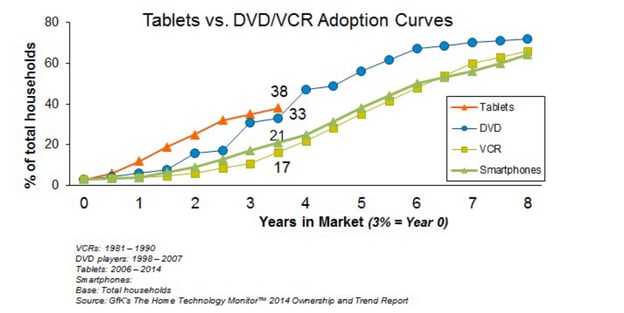 Those unoccupied periods of time when we used to relax and contemplate life now cause us to instinctively reach to unlock our phone or tablet and find something to do. This is both a blessing and a curse for media stakeholders. On one hand, we see time that used to be media-free now filled with consumption of their content, and, of course, advertising inventory. On the other hand, mobile devices observe no boundaries and are just as likely to interfere with existing media time as they are to supplement it. The Holy Grail for media stakeholders is to maximize use while minimizing cannibalization – or, to somehow create a new media offering that is of greater value than the legacy media it is replacing.

The rapid mainstreaming of these mobile devices means that usage has quickly moved past the typical early adopter, particularly for younger consumers. Again comparing our Fall 2011 and Fall 2013 waves of MultiMedia Mentor, the share of their total internet time on an average day reported to be on a mobile device for Americans aged 13-24 has increased from 25 percent to 40 percent – in just two years. Similar results are seen for those age 25-34 (23%/36%), 35-54 (15%/36%), and 55-64 (9%/25%) – everyone is jumping on the mobile bandwagon.

For media owners, the transition is well under way. Many publishers offer apps that bundle primary content (say text) with associated media (like video or audio). Aside from the “anytime” access to content, mobile lets publishers exert great control over the user experience within the “walled garden” that apps offer. A TV network that typically relies on an MVPD distributor to deliver their content to a consumer now can have total control of that experience with their brand.

However, some content types appear to be suffering more in the wave of the mobile transition. These can be categorized as “breaking” content – news, weather, and sports scores. With consumers able to access news, scores and weather in real time, there is little incentive to sit through a full length news program or sports update show on TV to get the few minutes that may be of interest.

Who will be the winners and losers in mobile media? Despite the rapid increase in adoption, it’s still early days. For instance, as more older Americans turn on a tablet or smartphone, we may find out that while content may be king, it may be trumped by a user interface that is mature-friendly. All this remains to be seen, with the big winner perhaps something we may not yet suspect – or may even exist.

David Tice is Senior Vice President on the Brand and Customer Experience team at GfK. He can be reached at david.tice@gfk.com.

How to leverage brand building for competitive advantage