Japan is the leading market for electric vehicles (EVs), with the majority of customers having a favorable overall opinion of them (82%) and considering a purchase (63%), according to a GfK study in six countries.

The study showed that Japan stands out as the only market in which EVs are seen as meeting direct personal needs. Everywhere else, consumers see the main benefit of EVs as societal - e.g. the cars are seen as environmentally friendly. The study surveyed consumers in China, France, Spain, Russia and the US, as well as Japan.

Japanese customers have a favorable option about electric vehicles

Japanese consumers perceive EVs as easy to operate, safe and reliable. They also see them as a good value for money and are willing to pay a premium price. Surprisingly, less than half of Japanese consumers who intend to buy a new car in the next two years say "low emissions" or "environmental friendliness" spring to mind when thinking about electric vehicles. Also in contrast to other countries, in Japan, which has adequate EV infrastructure, no barriers to purchase stood out. 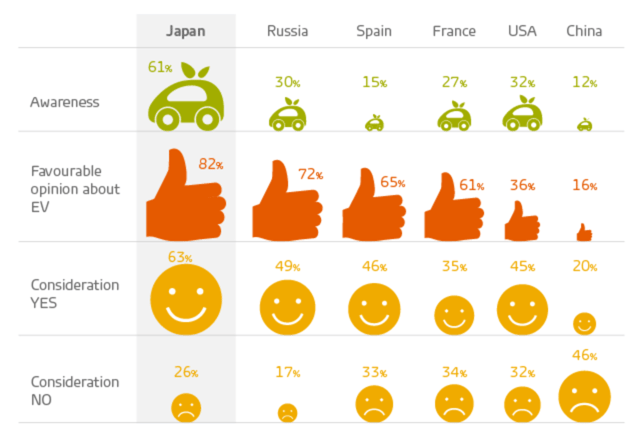 Electric Vehicles as a symbol of a modern green attitude

Around the world, EVs are perceived as a symbol of a modern green attitude, according to the study. More than half (55%) of all respondents said they have a favorable opinion of EVs. Some 77% saw benefit in low emissions and environmental friendliness. The fact that EVs are innovative appealed to 76% of those surveyed.

According to Yasushi Sato, Director of automotive research at GfK in Japan, the study's findings are not surprising. He said, "Companies paved the way toward high acceptance of EVs with the positioning of hybrid cars on the Japanese market. For instance, the Toyota Prius is one of the bestselling models, and the Japanese government offered tax incentives for new purchases. It makes sense that customers are open to the next level of “green” technology. Moreover, EVs suit Japanese mobility needs. Most people live in big cities, so drives are short, traffic is dense and people drive at low speeds. This means the current disadvantages of EVs, such as a limited battery capacity and lower range, do not have significant negative consequences for drivers."