Spanish consumers show a deep and clear divide between their knowledge about electric vehicles and their willingness to buy one.

A GfK survey showed that more than half of Spanish car buyers are willing to select an electric vehicle, but only 15% believe they know them well.

For instance, familiarity with electric vehicles is low despite the fact that 65% of potential car buyers in Spain in the next two years have a highly favorable opinion about them. Meanwhile, some 9 out of 10 respondents associate electric vehicles with the concept of "low emissions."

But what about the practical matters of buying and driving an electric vehicle?

With this positive perception, what's holding back Spanish buyers?

Barriers to acquisition include a perceived high purchase price and limited availability of points of service. José Luis Pérez, the Director of Automotive at GfK in Spain, said, "These results would indicate that the category should emphasize in all its communications the personal benefits of driving one of these cars - such as the ease of operation, safety and reliability - above the environmental benefits."

The Who's Who of electric vehicles in Spain

The GfK survey showed that buyers of high-end vehicles are more likely to acquire electric cars. In Spain, 55% would opt for a high-end sedan. Some 47% would pay up to 5% more, but most would not be willing to invest an additional 10% to drive an electric vehicle.

"These results reveal a market opportunity for premium brands. They will have a shorter run to position themselves as experts in this segment,” said Luis Pérez. 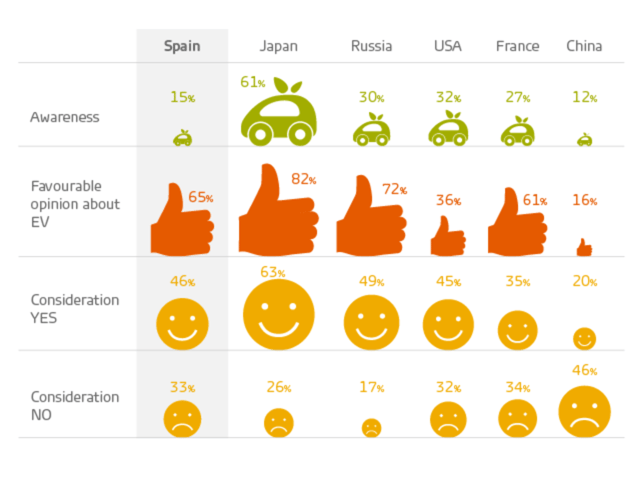 Tesla, the luxury electric car manufacturer, is setting up its first dealership in Spain in Madrid in early to mid 2014, with additional dealerships planned. Initial sales will focus on Tesla's Model S. New Tesla models are expected to hit the Spanish market in 2015, including the off-road Model X and later the more affordable model E (provisional name).

The main challenges for Tesla in Spain will be the price of Model S, which starts from 66,000 Euros. Tesla will also be impacted by a lack of official points of sale and few places for fast battery recharge.

As part of its expansion in Europe, Tesla announced the installation of supercharger points in Spain, where drivers can recharge batteries completely in one hour. At home, the recharge can take as long as nine hours. The superchargers will be installed at a maximum distance of 300 kilometers from one another.

“At the moment only 2% of all vehicles sold in Spain are electric or hybrid, but forecasts show that figures will increase during the next years. I see opportunity for Tesla in Spain,” said Luis Pérez.

If one examines proportional sales across Europe, using a figure of 3,000 expected sales for the Tesla Model S in the European Union in 2014, about 175 vehicles would be sold in Spain. But considering the ticket price of a Tesla, and the lack of superchargers and official points of sale still in Spain, the actual best estimate could be 50 units, since the car is expected to be trendy.

In 2013, only one Tesla car was officially sold in Spain and currently six units sold during 2014. It's interesting to note that Ferrari, Aston Martin and Maserati sold 40 to 50 units each per year in Spain.

José Luis Pérez is Director of Automotive at GfK in Spain. He can be reached at: joseluis.perez@gfk.com