A GfK study in six countries showed that Chinese consumers are the least interested in electric vehicles (EVs), due to price and reliability concerns.

The study surveyed consumers in China, as well as Japan, France, Spain, Russia and the US. In all six countries, more than half (55%) of respondents had a favorable opinion of EVs. The top three positive factors associated with EVs are the indirect benefits of low emissions/ environmental friendliness (77%), innovativeness (76%) and less noise pollution (73%).

Only one in five consumers open to considering electric vehicles

The market for EVs in China appears more difficult than all the rest, with only one in five consumers open to considering EVs, and even less holding a favorable opinion.

The GfK study showed that in China, opinions and feelings toward EVs have not yet been formed. The majority of respondents had a neutral impression (60%), a few had a favorable opinion (16%) and only one in five (20%) are open to considering EVs for purchase. 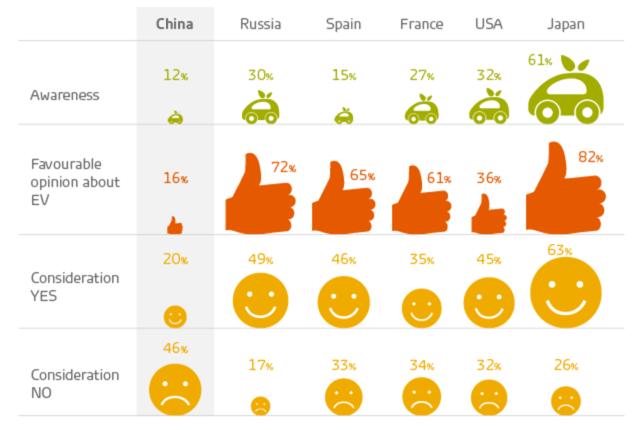 What is holding Chinese consumers back?

The main barrier in China is the insufficient driving range of EVs due to battery life. More than 75% of respondents saw the non-personal benefits of "low emission" as being most applicable to EVs, while the direct personal benefits were not widely perceived. Only half of respondents saw EVs as "easy to operate," and less than half said the cars have "low maintenance costs" or are "safe." In particular, only a third of Chinese consumers surveyed associated EVs with "great value for money" or "reliability."

By contrast, in Japan, which has by far the highest familiarity with EVs, it is the direct personal benefits that are most associated with the cars, such as "easy to operate," "safe" and "reliable."

"Chinese customers have little understanding of the benefits of EVs. In China, few mature EVs are on the market, and people are concerned about the charging infrastructure. Automakers should publicize more detailed information to dispel customer’s concerns when they launch EVs in China," said Simon Wang, General Manager Automotive at GfK in China.

Simon Wang is General Manager Automotive at GfK in China. He can be reached at Simon.wang@gfk.com