back
2
min read
share this page
Travel and hospitality

While on a 14+ hour flight, you have time to reflect on many things, and then some (and then some still).  As usability professionals, we often think about how things can be better to enhance the effectiveness, efficiency, and user experience of products, but after eight hours of using the 7” touch screen monitor in United’s new 777 Economy section, I thought I’d change gears and talk about the great experience I’ve had with this unit.

When you first board the plane, the screen is set to display the option to select between 12 different languages... not too shabby.  Though I can’t speak to how well things have been both translated and localized, they make use of a home icon just in case you accidentally press a language which you are unable to read (or if you are curious, like me). 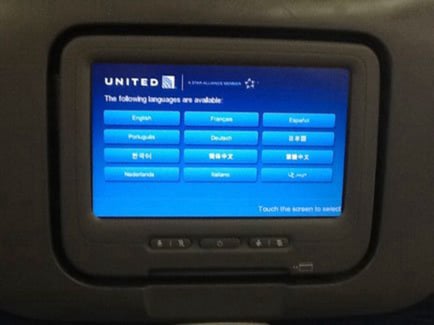 After language is selected, there is a persistent display of ‘Flight Time Remaining’ on every screen, even during movies.  I appreciate not having to go to the traditional ‘map’ view to access this information, though they have a persistent ‘Map’ button to view that information as well.  For those thinking that this display could actually make the flight experience ‘longer’, no worries.  While watching a movie, the controls and timer are minimized until you touch the screen.

In the movies section, gone are the days where you can choose between 6-8 movies.  There are over 50 movies.  Yes, I counted—twice—but counted 56 the first time, then 57 the second time, and I was about to start a spreadsheet when I realized that ‘over 50 movies’ would suffice.  Movies ranged from new releases to old classics (Christmas Vacation; Die Hard; Dirty Dozen).

I know that Video-on-Demand is not new, especially when flying Business/First, but being a United Mileage Plus member, I rarely fly on other air carriers (yes, DirecTV would be pretty cool).  From my recollection of on-demand movies when I flew Business class years ago, I didn’t recall the ability to pause and move forward and backwards through the movie.  Video-on-Demand has a particularly positive effect on my travelling experience in this way: because passenger’s viewing is not synced with other passengers, there isn’t a mass journey to the restrooms… but I digress. Another nice feature is if you did want to, say, access the Map screen, you can resume watching the movie, no problem.

Other cool features of the entertainment system include a variety of TV shows (I didn’t count), music stations, games, and even audio books.  (I assume audio books must be still a WIP, as there were only 6 books, none of which were familiar to me.)

There’s also a survey available (which I took), located in the About This Flight menu.  Questions include asking for feedback on the amount of movies, most preferred genre of TV, preferred choice from a list of specific TV shows, most preferred movie genre, likelihood of listening to an audio book, and most preferred audio book category.  Ten questions in all, and it made me feel like passengers’ input would help influence the entertainment selections.

Aside from the screen’s interface, the light and call buttons are now located beneath the touch screen.  While I wish they were dimly illuminated, this is a minor inconvenience.

Probably the best change in the new configuration is the placement of the headphones input.  I have broken several headphones—albeit cheap headphones—from having them plugged into the headphones jack on the inside of the arm rest.  The new configuration has the jack on the front side of the armrest.  I no longer have worries that the plug will get bent, though I wonder if this will be a problem when passengers walk in and out of the rows.

All in all, this new entertainment system has significantly enhanced my flying experience.  Hats off, United!  Now, the only thing that would put me in absolute flying heaven is a power port.  Battery life at 27%, so I suppose I’ll shut down now and watch one of the 50+ movies.

What we want in tomorrow’s car: in-car internet, entertainment and active safety features

EMV and the impact on user experience