The number of online poker sites and players has exploded exponentially since Chris Moneymaker won the 2003 World Series of Poker Main Event. The aptly-named Moneymaker took home $2.5 million after buying into a $39 online poker tournament. Today, during peak hours, over 50,000 real-money players can be found playing at any given time on top online poker sites such as Full Tilt Poker, Poker Stars, and Party Poker.

Although the courts have handed down judgments that define poker as a game of chance, many players firmly believe that poker is a game of skill. They also believe the ability to "read" your opponent is a key determinant of winning and losing. If this is indeed true, then how can poker players "read" opponents when playing online? Online play does not provide the same opportunities as physical seats at poker table in a casino, where you can observe the body language of other players, your opponent's facial expression, or the way opponents handle chips when they are sitting idle or betting. Instead, online poker players must rely on more subtle clues. Many describe online poker as a game "characterized by a complete lack of visual tells." These online strategies often focus on the analysis of opponents' betting patterns.

As psychologists and professionals in usability and user interface design, we were curious if additional behavioral cues can be gathered from a poker site's user interface (UI) aside from how players use the betting buttons. (We've also been known to play poker every now and then…) Is the rest of the UI purely for aesthetics or can players obtain a "read" on opponents based on how they use the various features on the site's UI? We would like to suggest that other UI elements can certainly help players obtain poker tells. In particular, avatars could be a valuable source of information for players. For online poker companies, this might be an opportunity to enhance the features and functions of avatars during game play.

In the gaming world, avatars are used as physical representations in the virtual world. Avatars provide an extra layer of entertainment for gamers and allow gamers to embellish their gaming identities. It is not uncommon for individuals to create avatars that draw on some of their real-life physical traits. 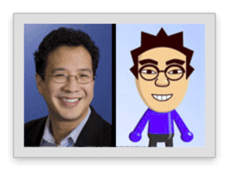 However, gamers sometime create alter-egos or represent themselves in ways that are otherwise not possible in real life. In a recent paper by Hussain and Griffiths, 57% of gamers were found to have engaged in gender swapping. Over two-thirds of females engaging in gender swapping when creating avatars. Reasons for gender swapping included different abilities afforded by choosing an opposite-gendered avatar. The study also noted that females believed they would encounter less online harassment when assuming a male avatar. Overall, the authors' major conclusion was that choosing an opposite-gender avatar may affect the gamer's style of play and interaction with other gamers.

Similar to other gaming environments, many online poker sites use avatars to represent the player. On sites like Full Tilt Poker, players can choose from a variety of avatars, from different humans, animals, and even fictional or inanimate objects.

However, the motives for selecting an avatar in online poker games may be quite different from other online games. Do players select an avatar that suits their poker style (e.g., selecting an ATM machine because the player is a loose player) or do players select avatars to induce opponents to make incorrect assumptions about the player and their style of play that equate to positive gains, whether it be play chips or real money? From a strategic vantage point, a poker player may select a specific type of avatar to suggest a loose style of play when, in fact, the player's style of play is tight and aggressive.

In addition to providing basic avatars that indicate when a player has joined an online game, some poker sites also allow players to change their avatar's emotional expression. We've been known to successfully bluff a fold or induce raises simply by changing the avatar's emotion.

Although there is no data or study to date on online poker avatar selection, we think there is valuable information to be gained here. Although online poker sites do not allow players to read opponents' physical composure, their online avatars provide an extra layer of information that players can use to inform (or manipulate) their play. We might even say it is easier for players to bluff in online poker than in physical tournaments at casinos because in-person bluffing requires much better control over body language (reactive control). In contrast, online avatars only display emotion changes when the player consciously decides to broadcast these emotions.

This raises the distinct possibility that your opponent might be smiling because of a bluff or because s/he has a made hand. You might wonder if your opponent changed avatar emotions on previous hands and if so, was that done as a bluff or was it done to induce a call? Among players who usually change avatar emotions frequently, the very act of not changing an emotion can also be considered a distracting ploy that their competitors must analyze.

While poker avatars may have been traditionally thought of as a fun UI element, they also introduce simulated tells and bluffs to the game. Moreover, avatars add richness to the online poker experience in ways that can't be done in a casino (unless you decide to wear costumes at your local poker tournament).

Can avatars be developed even further to enhance the user experience? We believe the answer is yes. There is a clear opportunity for poker game developers to provide additional avatar features and functions that will appeal to both the novice and seasoned players. For example, future avatar enhancements we hope to see include:

• Additional emotions: Given the gamut of emotions we've experienced at the poker table, one emotion that immediately came to mind was the feeling of intense nervousness. Perhaps avatars could show signs of sweating or having a rapidly-beating heart.

• Stealth mode: After making a bet, players could change their avatar to Stealth mode where the avatar puts on a pair of sunglasses, a branded baseball cap, or perhaps looks like Phil Laak in a hooded sweatshirt.

• The stare down: While waiting for an opponent to act after a bet or raise, players can engage a stare down feature. For example, the avatar's eyes could incrementally increase in size.

• The headphones: We had an internal debate about this suggestion, but it still has merit. , What if an avatar had headphones on to signify they were playing on multiple tables? The headphones would symbolize the sometimes frustrating experience in casinos when players are too busy listening to their music to pay attention to the game. Headphones would provide a visual cue about a player's level of distraction, and since this information is already available on poker sites, we still think it is useful information for the other players at the table. It still won't make delayed play (due to multi-tabling) okay, but at least it allows players to provide a possible reason for their delay.

These enhancements would appeal to the competitive nature of poker players, and we believe that sites that offer these kinds of features will attract both novice and seasoned players. For the novice player, a more interactive avatar simply adds to the overall experience. While recreational poker players play to win, there's also a "fun" component to playing. For the seasoned player, any additional layer of information that can be provided in a virtual environment helps narrow the gap between online poker and poker in a casino.

Since poker is a game of decision-making with incomplete information, poker players look for information at all angles. Players still believe there is simply no way to gain as much information on online poker compared to physically sitting at a table. For online poker, the avatar is but one UI element that can help narrow this information gap. In our view, this is a win-win situation for both game developers and online poker players.

Good luck and see you at the tables!

Determining Measures of Success in Point of Sale Interface Design

Key players in the microconsole category