For today’s voracious video viewers, accustomed to on-demand access to pretty much anything, one streaming video service simply may not be enough. New GfK research in the US has found that 16% of the viewing population* have multiple SVOD (subscription video-on-demand) services in their homes, up from 10% three years ago.

Click here to view a full infographic from this study. 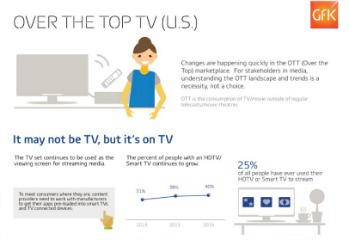 The new report from GfK’s The Home Technology Monitor™ shows that these “self-bundling” viewers – those who pay for combinations of Netflix, Amazon Prime, Hulu, and other subscription streaming services – are more likely to have kids under 18 in their homes (50%, versus an average of 41% among all weekly viewers of any type).

“Self-bundlers” also have higher mean incomes than average weekly viewers – at $90,000 per year versus $76,000 – but are less likely to subscribe to traditional pay TV services (67% versus an average of 75%).
The implications for content creators and brands alike are striking. Marketers want access to high-income households with very young consumers – who often influence their parents’ purchase decisions – but may have less access through standard channels (such as pay TV) if they self-bundle.

Overall, GfK measured subscribing to 16 for-pay over-the-top (OTT) streaming video services, with consumers who pay for any two or more considered to be “self-bundling.” Roughly half (49%) of the viewing population subscribes to at least one of these services; almost two in ten (17%) have Netflix and Amazon Prime; 9% have Netflix and Hulu Plus; and 5% have all three of the major services.

Specific combinations of subscription streaming services are associated with different effects; for example, households with Netflix and Hulu (59%) are less likely to have pay TV service than those with Netflix and Amazon Prime (67%).

“As consumers start to self-bundle, the potential impact of increasing subscriber fees for each streaming service will be compounded,” said David Tice, SVP of Media and Entertainment at GfK. “The last one to a price increase party may be the first one cancelled – so individual streaming services need to consider competitor plans before instituting price hikes. There may also be a place in the market for a third-party aggregator of discounted streaming services.”

GfK’s report, “Over-the-Top TV 2016: A Complete Video Landscape,” is based on interviews with 1,054 consumers on GfK’s KnowledgePanel®, which combines the capabilities of web-based interviewing with robust probability-based samples. This is the seventh annual wave of this report, which includes:
• trends in ownership and use of two dozen devices that can be used to watch or deliver video content;
• use of content distributers like DVD rental kiosks, iTunes, EST, and SVOD services; and
• deep dive usage characteristics of the three major US SVOD services.

* The “viewing population” includes all those who watch any video at least once per week via any means – regular TV, streaming, or otherwise. This is 95% of the total 13-to-64 US population.