Latest research from GfK into the UK’s OTT viewing habits has revealed surprisingly low audience numbers on mobile devices. It seems that watching subscription video content on Netflix, Amazon and Now TV is, for now, most definitely an in-home entertainment experience.

The vast majority (90 percent) of the UK’s OTT users have access to a mobile device (smartphone and/or tablet).
That’s significantly more than other viewing devices such as internet-enabled games consoles (60 percent), set-top box (54 percent) and smart TV (52 percent). However, when asked which devices they had used to view over the course of a week, only 4 percent of OTT subscribers used a smartphone to view content and just 1 in 10 used a tablet.

Having invested in a subscription to one or more video services, viewers are almost unanimous in their preference to watch that content at home. Overall, 98 percent of all content is viewed at home and 86 per cent of all content viewed on a mobile device is also watched at home.

Download vs. streaming OTT on a smartphone or tablet
As well as the small screen, one of the challenges with watching OTT content on a smartphone is inadequate data usage allowances. That can put streaming, which is the way many subscribers view, out of reach. Our analysis of the content Amazon subscribers view illustrates the point. Amazon is the only service to currently allow its users to download content onto a mobile device. Subscribers are certainly taking advantage of this as the green bars in the chart below show. 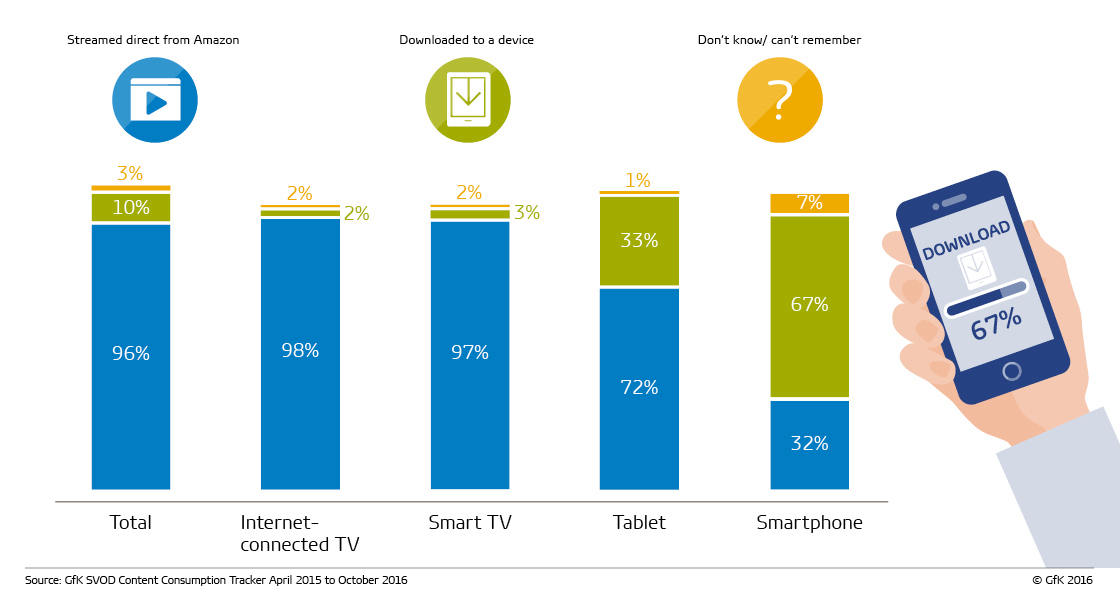 Dan Hardwick, Senior Research Executive at GfK, says: “Despite the runaway success of OTT services over the past couple of years, viewing remains very much an activity done at home on a large screen. Given the near universal ownership of mobile devices among OTT users, Netflix, Amazon and Now TV are still yet to properly exploit the vast potential that clearly exists for OTT viewing on mobiles out of home.

Though Amazon has been the first to offer this functionality to subscribers and Netflix has recently also launched an option for users to download content, they are yet to transform OTT viewing from an activity done solely at home on a TV to one also done  on the move on mobile devices.”

About the study
Fieldwork was conducted online in the UK continuously between April 2015 and October 2016. 17,982 respondents were surveyed in total. They completed an initial profiling questionnaire collecting demographics, services subscribed to, general viewing behaviour and device ownership
This was followed by a 7 day diary collecting viewing of Netflix, Amazon Prime Video and Now TV at the title level including device used, where and who viewed.

Lastly, they completed an end of week survey collecting reasons for sign-up, satisfaction with services, future intentions and claimed impact of viewing on other services
Data has been weighted to be representative of the UK profile of Netflix, Amazon Prime Video and Now TV users by age and gender.

About GfK
GfK is the trusted source of relevant market and consumer information that enables its clients to make smarter decisions. More than 13,000 market research experts combine their passion with GfK’s long-standing data science experience. This allows GfK to deliver vital global insights matched with local market intelligence from more than 100 countries. By using innovative technologies and data sciences, GfK turns big data into smart data, enabling its clients to improve their competitive edge and enrich consumers’ experiences and choices.