UK Consumer Confidence rises two points to -7 in May

“UK consumers are feeling more upbeat this month with a two-point rise in the Overall Index Score. The scores for personal finances (both for the past year and next year) are positive. However, consumers remain resolutely downbeat about the general state of the economy.

"These negative economic scores are depressing the Overall Index and preventing it from breaking out into positive territory. We have been at zero or negative for 29 months now. When will the strong jobs market and rising real incomes, coupled with ongoing low interest rates and low levels of headline inflation, have an impact?

"Meanwhile, there’s little motivation to spend - as seen by a two-point drop in the Major Purchase Index. With UK retail sales falling at their sharpest rate since the mid-90s, tough trading conditions for Britain's hard-pressed retail sector continue to take their toll. Shoppers are still not showing signs of a willingness to splash-the-cash.

"Will this self-imposed austerity remain the hallmark of pre-Brexit Britain in the run-up to March 2019 and beyond?”

The index measuring changes in personal finances during the last 12 months has increased two points this month to +1; this is one point lower than this time last year.

The forecast for personal finances over the next 12 months has increased four points to +8 this month; this is four points higher than May 2017.

The measure for the General Economic Situation of the country during the last 12 months has increased five points to -24; this is four points lower than May 2017.

Expectations for the General Economic Situation over the next 12 months have increased three points to -21; this is at the same level as May 2017.

The Major Purchase Index has decreased two points this month to +1; this is eight points lower than May 2017.

The Savings Index has decreased three points to +7 in May; this is two points higher than this time last year. 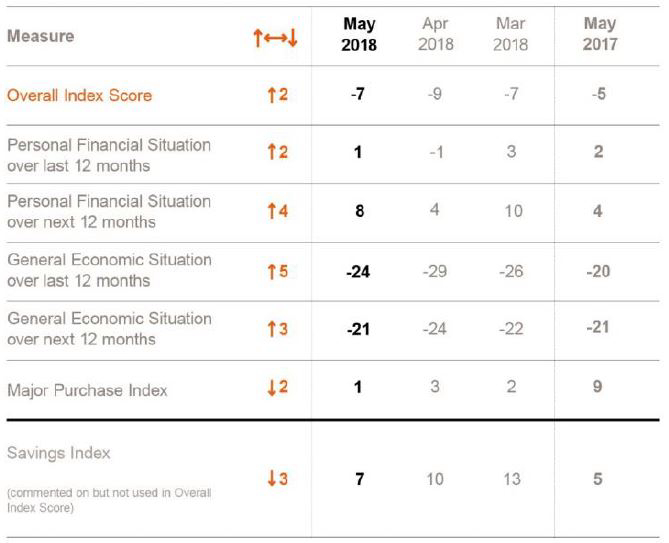 The list below provides an overview of the questions asked to obtain the individual index measures:

This index is based on the following question to consumers: ‘In view of the general economic situation, do you think now is the right time for people to make major purchases such as furniture or electrical goods?’ (right time – neither right nor wrong time – wrong time)