Spring is in the air with increases across the board on personal finances, the general economy and purchase intentions

"Despite the Beast from the East leaving the nation shivering under a blanket of snow, stoic UK consumers turned faintly bullish this March with a three-point uptick in the Overall Index Score to -7. Spring is in the air with increases across the board on personal finances, the general economy – over the last year and next year – and on current major purchase intentions. The prospect of wage rises finally outstripping declining inflation, high levels of employment with low-level interest rates, and finally some movement on the Brexit front appear to have boosted our spirits. It’s still a little early to be talking about green-shoots, and the core score is of course still negative, but this is definitely a movement in the right direction. Consumers are feeling a tiny spring in their step – let’s see next month if April showers dampen the mood."

The Overall Index Score in March 2018 is -7. All five of the measures increased in March.

The index measuring changes in personal finances during the last 12 months has increased three points this month to +3; this is one point higher than this time last year.

The forecast for personal finances over the next 12 months has increased five points to +10 this month; this is seven points higher than March 2017.

The measure for the General Economic Situation of the country during the last 12 months has increased three points to -26; this is five points lower than March 2017.

Expectations for the General Economic Situation over the next 12 months have increased four points to -22; this is two points lower than this time last year.

The Major Purchase Index has increased two points this month to +2; this is four  points lower than March 2017.

The Savings Index has increased one point to +13 in March; this is 14 points higher than this time last year. 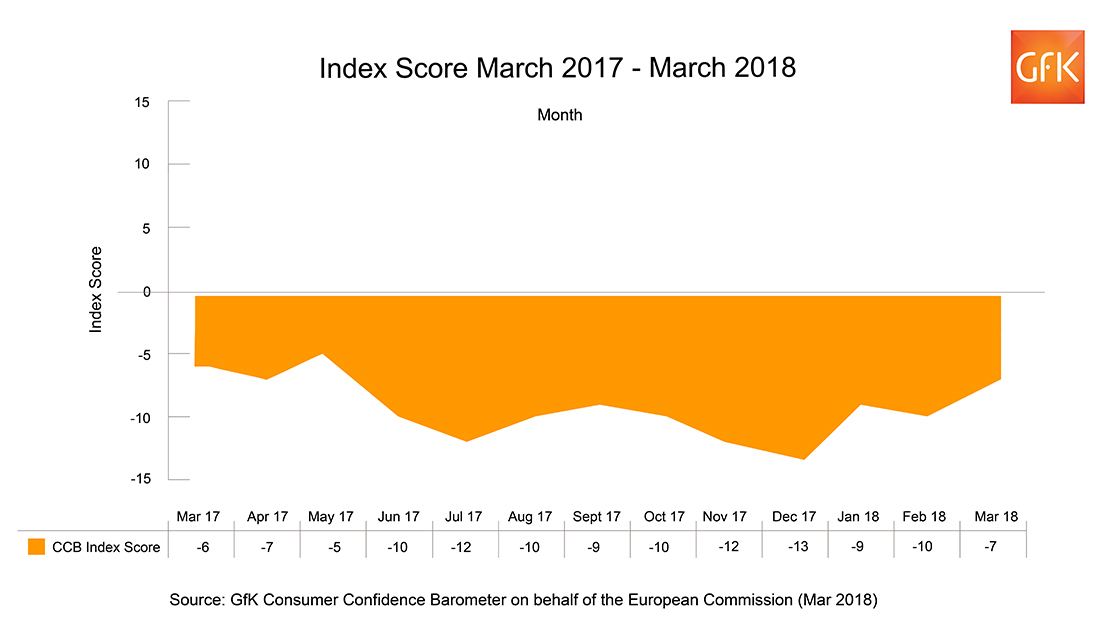