GfK’s long-running Consumer Confidence Index is unchanged at -14 for November. One measure increased, one is unchanged, and three measures decreased this month.

Joe Staton, Client Strategy Director at GfK, says: “In the face of Brexit and election uncertainty, consumers are clearly in a ‘wait-and-see’ mode. The score for the general economy over the coming year has ticked up three points and this is possibly an indication that some consumers believe the imminent general election might clear the Brexit deadlock, even though this sub-measure is still in deeply negative territory at -34.

"The general election is potentially an opportunity to move us out of the doldrums – but for this to happen there must be a clear result. A hung parliament could be very damaging for consumer confidence and would surely deepen the obvious malaise that we see month after month.

"We have not seen a positive headline score since January 2016 – that’s nearly four years ago. Uncertainty is nobody’s friend. So, while many issues are under the spotlight in this election, political parties will need to satisfy voters that they will be effective for the wider economy and that, as a consequence, people will be better off next year and beyond.

"Consumers need to be convinced they will be able to balance their personal accounts beyond ‘just about managing’. Fantasy economics alone will not guarantee votes.”

The Overall Index Score in November 2019 is -14. One measure increased, one is unchanged, and three measures decreased this month.

The index measuring changes in personal finances during the last 12 months has decreased by one point this month to 0; this is three points higher than November 2018.

The forecast for personal finances over the next 12 months is unchanged at +1 this month; this is two points lower than November 2018.

The measure for the general economic situation of the country during the last 12 months has decreased one point this month to -34; this is five points lower than in November 2018.

Expectations for the general economic situation over the next 12 months have increased three points to -34; this is two points lower than November 2018.

The major purchase index decreased one point in November to 0; this is three points higher than in November 2018.

The savings index has decreased three points in November to +18; this is six points higher than at this time last year. 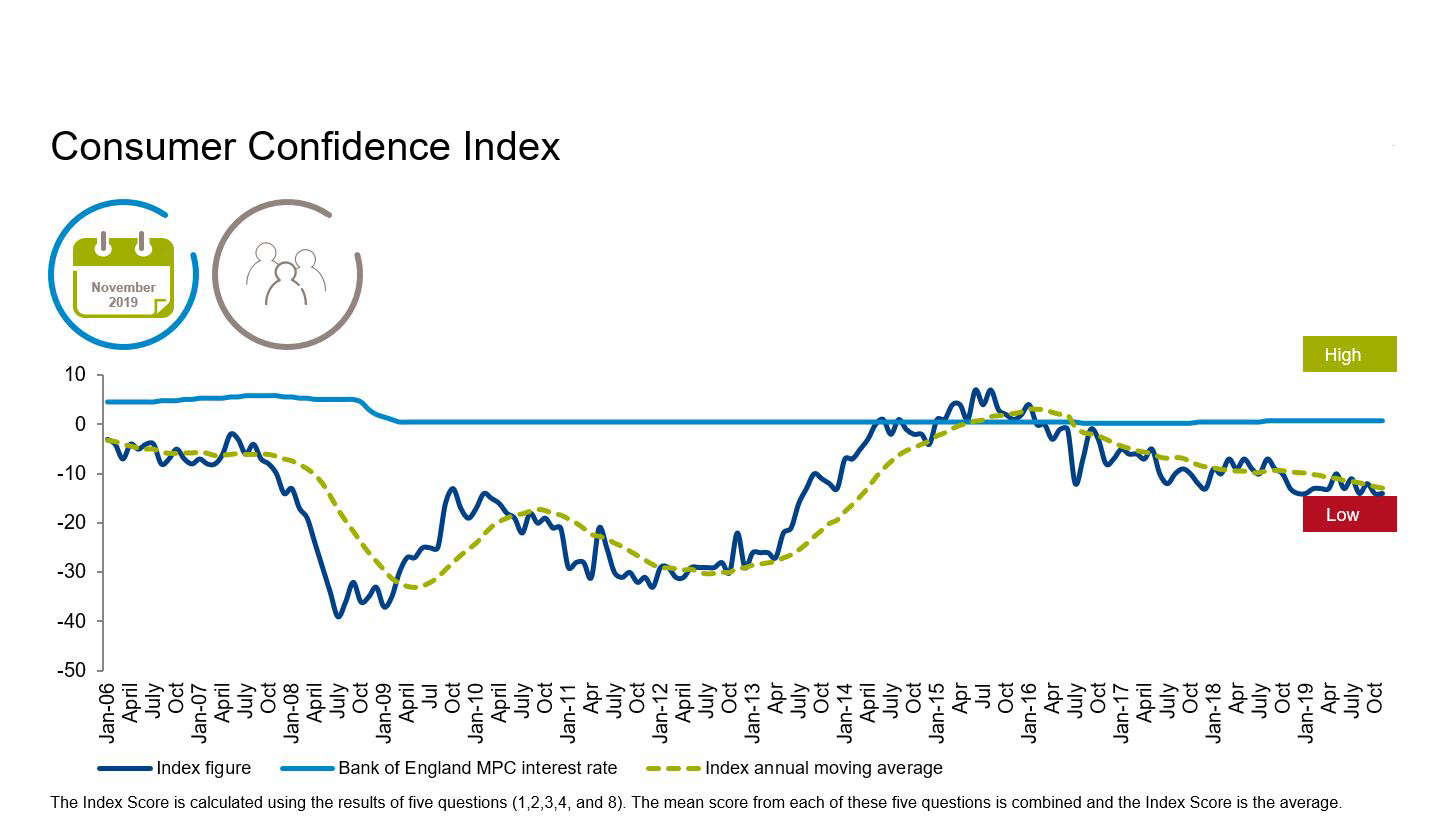 The UK Consumer Confidence Barometer is conducted by GfK on behalf of the EU, with similar surveys being conducted in each European country.

In producing its own reports on the whole of Europe, the EU applies a seasonal adjustment to the data, to smooth out any changes that are functions, at least in part, of the time of year. Historically, the UK data have not been seasonally adjusted in this way, and to maintain comparability, GfK continues not to apply this adjustment. This can lead to situations where the EU figures show different movements in a particular month from those produced by GfK. Individual months may be affected, but the long-term trend is not.

Interviewing was carried out during 1st – 14th November 2019.

The release date for December is Friday 20th December 2019.