Joe Staton, Client Strategy Director at GfK, says, “Consumers are yet again feeling less upbeat as is evident from the two-point drop in the Overall Index Score this month. We are reporting falls across all key measures. Scores on personal finance are down but there is a more marked deterioration in our levels of optimism about the general state of the economy, with the verdicts on the past year and the coming year each tumbling four points.

"When will the strong jobs market and low interest rates boost the economic mood? That’s the key to confidence increasing more generally. Meanwhile, with Britain’s hard-pressed retail sector very much in the news, there is little comfort in the one-point drop to zero in the Major Purchase Index. Shoppers are holding on to their cash and consumers in general seem set on their path of self-imposed austerity.

"The Overall Index Score has now registered at zero or negative for 30-months. Contrast that with 2015 – when there was a full year of positive numbers. The trend since those 2015 figures has been resolutely downwards and it’s difficult to see the direction changing in the run-up to the UK leaving the European Union in March 2019.”

The Overall Index Score in June 2018 is -9. All five measures decreased in June.

The index measuring changes in personal finances during the last 12 months has decreased one point this month to 0; this is one point higher than this time last year.

The forecast for personal finances over the next 12 months has decreased two points to +6 this month; this is six points higher than June 2017.

The measure for the General Economic Situation of the country during the last 12 months has decreased four points to -28; this is three points lower than June 2017.

Expectations for the General Economic Situation over the next 12 months have decreased four points to -25; this is two points lower than June 2017.

The Major Purchase Index has decreased one point this month to 0; this is one point lower than June 2017.

The Savings Index has increased one point to +8 in June; this is four points higher than this time last year. 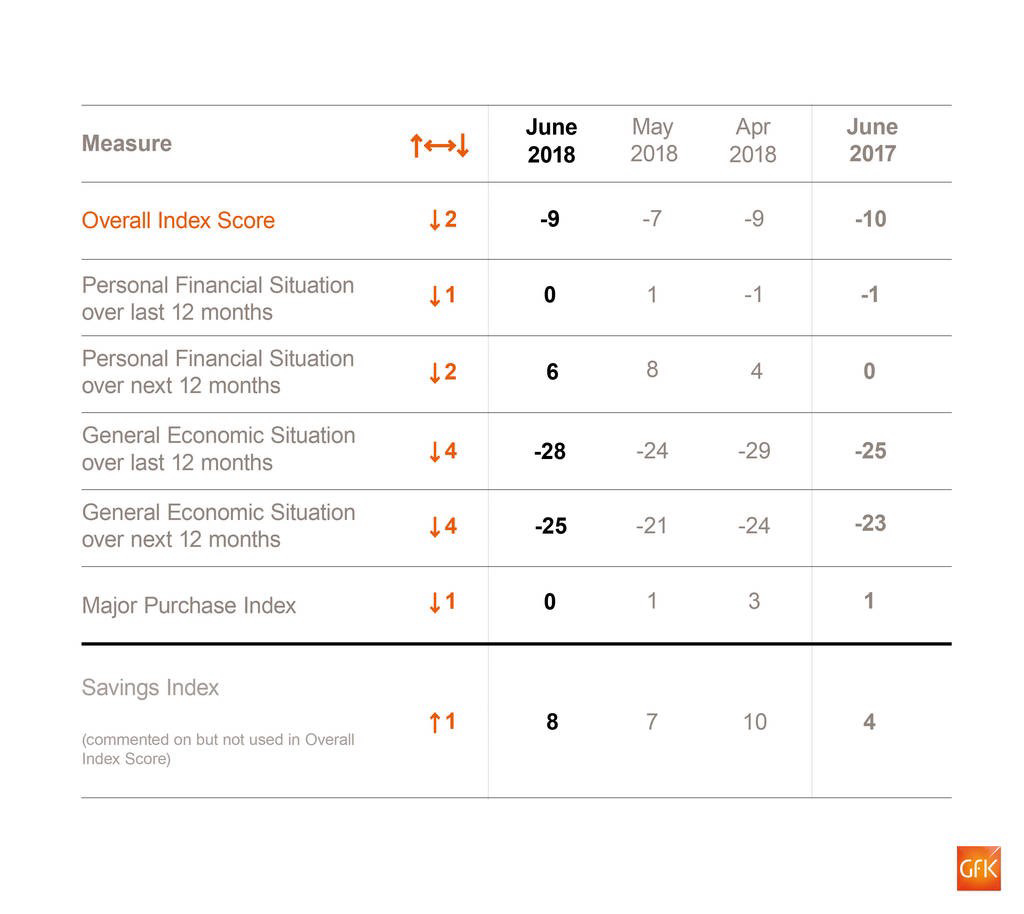