“We now have 28 consecutive months without a positive Overall Index Score. The last positive was in January 2016. Hope springs eternal for better numbers for the UK Consumer Confidence Index but the continued uncertain economic forecast means that the sun is not yet shining brightly for UK consumers. Despite the headline news proclaiming that UK wages rose faster than inflation, no imminent interest rate rise on the horizon, and record high levels of employment, the Index continues to bump along stubbornly in negative territory with a two-point slide to -9 this April. As consumers, we need to see clear evidence with our own eyes – in our bank balances and pay packets – that balmier economic climes have returned. Yet our view of the general economic situation for the UK remains low. More worryingly, there is a steep decline this month in the numbers concerning our personal financial situation – for both the past 12 months and the year ahead. This is the measure relating to security in our day-to-day finances and propensity to shop, spend and plan for their future. But there’s little evidence of optimism in that respect. Consumer confidence is stuck in the doldrums.”

The Overall Index Score in April 2018 is -9. Four of the five measures decreased in April, with the remaining measure increasing.

The index measuring changes in personal finances during the last 12 months has decreased four points this month to -1; this is two points lower than this time last year.

The forecast for personal finances over the next 12 months has decreased six points to +4 this month; this is two points higher than April 2017.

The measure for the General Economic Situation of the country during the last 12 months has decreased three points to -29; this is six points lower than April 2017.

Expectations for the General Economic Situation over the next 12 months have decreased two points to -24; this is three points lower than this time last year.

The Major Purchase Index has increased one point this month to +3; this is four  points lower than April 2017.

The Savings Index has decreased three points to +10 in April; this is nine points higher than this time last year. 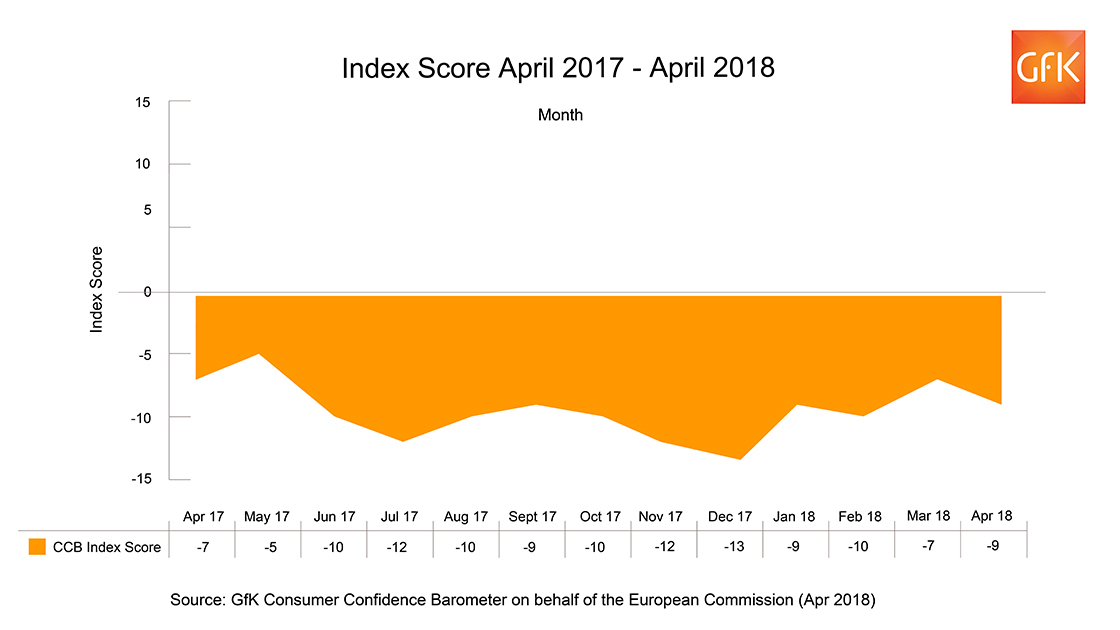