UK Consumer Confidence drops one point in December to -13

GfK’s long-running Consumer Confidence Index decreased by one point to -13 in December. Two of the five measures used to calculate the score fell in December, two measures stayed at the same level and one saw a one-point increase.

“It has been a slipping and sliding year. The Overall Index Score has slipped from - 7 in January to -13 in December – and not a single positive score in between. In fact, we have not been in positive territory for nearly two years. It’s a similar story for the Major Purchase Index, a robust +10 at the start of the year in January but a sombre slide down to -4 by year’s end.

And it’s no surprise it’s the reverse for our Savings Index, at -5 last December and -2 in January, then -4 in Feb, all indicating at the beginning of the year limited intentions to squirrel money away. But we saw positive scores from April onwards, suddenly people were thinking of saving, getting more cautious as the year progressed. We need to see several issues move on before the downward trend of the consumer mood changes. We need to have a better sense of how Brexit will pan out, and also of how quickly and how far interest rates will rise. But none of this will be resolved quickly so there’s every likelihood that 2018 will take us lower.”

UK Consumer Confidence Measures – December 2017
The Overall Index Score in December is -13. Two of the five measures used to calculate the score fell in December, two measures stayed at the same level and one saw a one-point increase.

Personal Financial Situation
The index measuring changes in personal finances during the last 12 months has decreased two points this month to -3; this is three points lower than this time last year.
The forecast for personal finances over the next 12 months has stayed at the same level at +2 this month; this is one point lower than December 2016.

Savings Index
The Savings Index has decreased to +4 in December; this is nine points higher than December 2016. 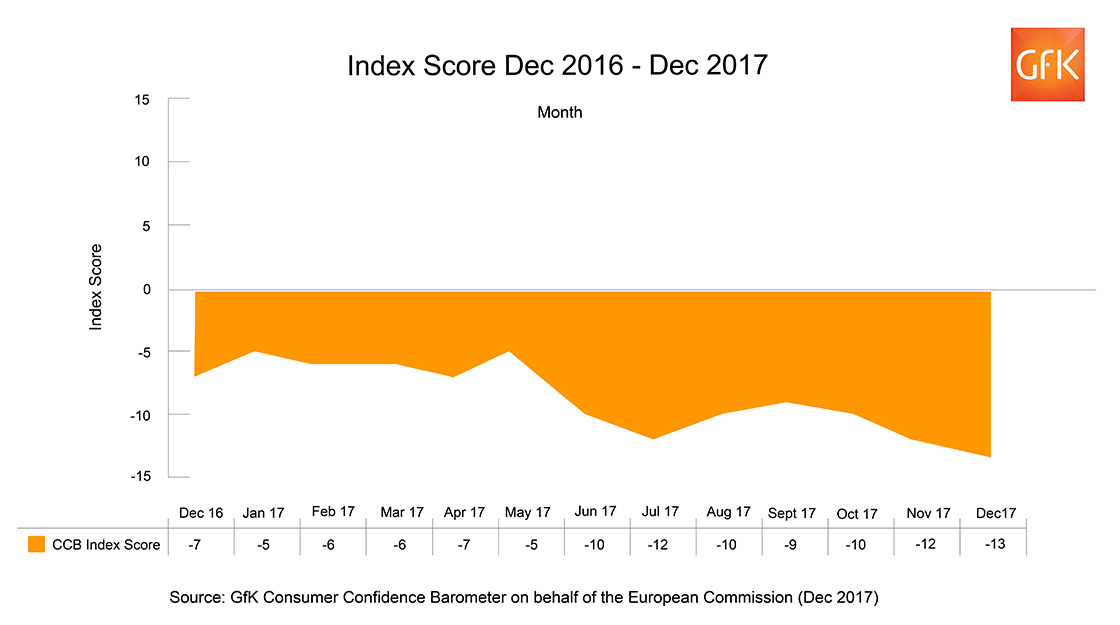