Does reduced confidence in personal finances for the year ahead pose a risk to the wider economy?

Joe Staton, Client Strategy Director at GfK, says: “In the face of continued Brexit uncertainty, the overall Index score fell to -14 this month. Importantly, the ongoing machinations in Westminster appear to be impacting how we view our personal financial situation for the coming year, with a fall of -3 in this measure in October. Is this an early sign of long-running weak economic confidence spreading to the way we view money matters?

"This deterioration in sentiment regarding our personal financial affairs is worrying as strong consumer spending has been the main driver of economic growth since the Referendum in 2016 against a backdrop of low inflation, low interest rates, low wage growth and high employment.

"Does reduced confidence in personal finances for the year ahead pose a risk to the wider economy? Nobody wants to see consumer spending reduce and let’s hope it doesn’t happen. But Brexit’s continuing uncertainty and the spectre of a general election is not helpful. People can only feel confident if they believe the external environment is stable, yet consumers are witnessing too many Brexit shifts and surprises, too many Brexit timelines and counter proposals to justify any longer-term confidence. The big black Brexit cloud is refusing to shift.”

The Overall Index Score in October 2019 is -14. All five measures decreased in October.

The index measuring changes in personal finances during the last 12 months has decreased by one point this month to +1; this is the same as October 2018.

The forecast for personal finances over the next 12 months decreased by three points to +1 this month; this is three points lower than October 2018.

The measure for the general economic situation of the country during the last 12 months has decreased one point this month to -33; this is five points lower than in October 2018.

Expectations for the general economic situation over the next 12 months have decreased two points to -37; this is nine points lower than October 2018.

The major purchase index decreased two points in October to +1; this is three points lower than in October 2018.

The savings index has decreased two points in October to +21; this is nine points higher than at this time last year. 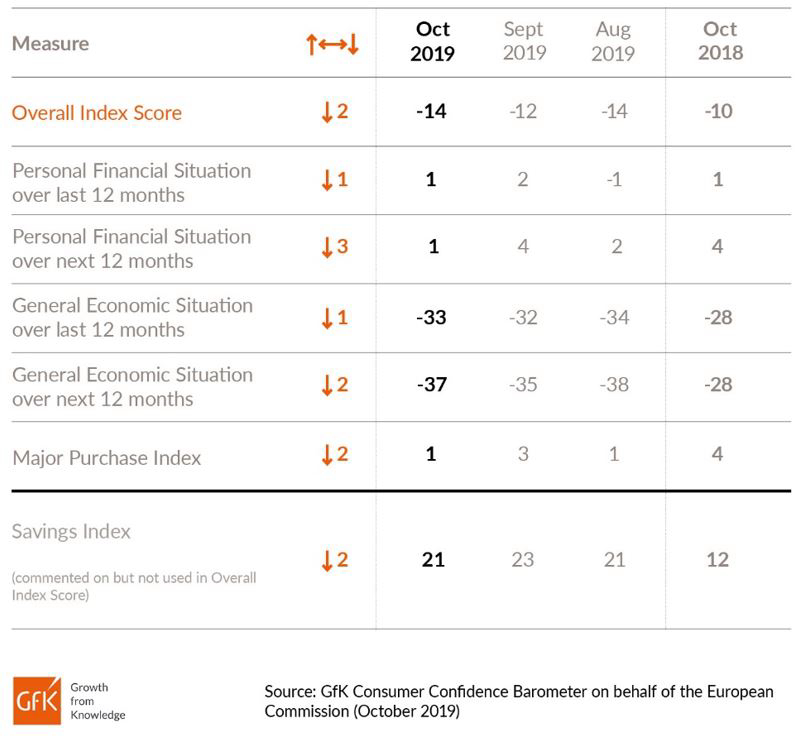 The UK Consumer Confidence Barometer is conducted by GfK on behalf of the EU, with similar surveys being conducted in each European country. In producing its own reports on the whole of Europe, the EU applies a seasonal adjustment to the data, to smooth out any changes that are functions, at least in part, of the time of year.
Historically, the UK data have not been seasonally adjusted in this way, and to maintain comparability, GfK continues not to apply this adjustment. This can lead to situations where the EU figures show different movements in a particular month from those produced by GfK. Individual months may be affected, but the long-term trend is not.
The UK Consumer Confidence Survey from GfK was conducted among a sample of 2,001 individuals aged 16+ on behalf of the European Commission.

Interviewing was carried out during 1st – 14th October 2019.