UK consumers grappling with ‘new abnormal’ amid uncertainty and turmoil

GfK’s long-running Consumer Confidence Index increased two points in October to -47. Three measures were up, one was flat and one decreased in comparison to the September 23rd announcement.

“UK consumer confidence continued to bump along close to last month’s historic low, with an Overall Index Score of -47 in October. However, all core measures remain severely depressed. The three-point fall in the major purchase measure continues a steep downward trend that began in July 2021 and is especially worrying for the final quarter of the year, which many businesses rely on to strengthen their balance sheets. But the biggest danger by far is inflation, now rising at its fastest rate for 40 years. Households are not just running scared of burgeoning energy and food prices, and the prospect of further base rate rises increasing mortgage costs. They are now facing the likelihood of tax rises and even austerity measures. For ordinary consumers, this web of uncertainty and turmoil amounts to a ‘new abnormal’. The negative environment will deflate future spending plans, and cautious consumers could easily slow the UK economy still further. Consumers, like governments, are just as capable of U-turns, and today’s economic headwinds indicate a long hard winter.”

The Overall Index Score increased two points in October to -47. Three measures were up, one was flat and one decreased in comparison to the September 23rd announcement. 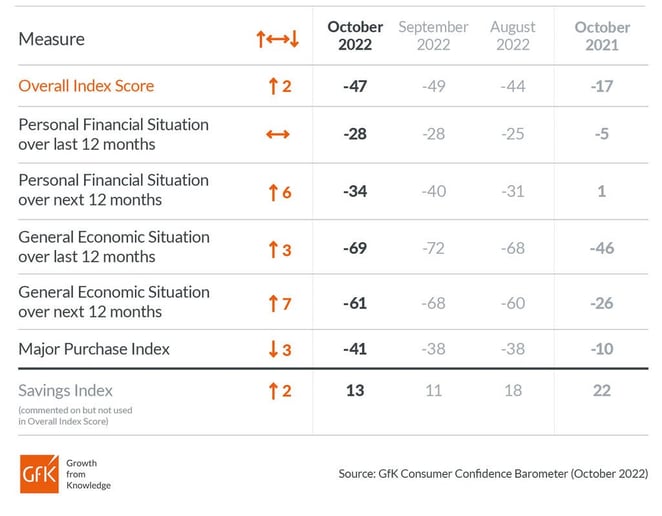 The index measuring changes in personal finances over the last 12 months was the same at -28; this is 23 points worse than October 2021.

The forecast for personal finances over the next 12 months has increased six points to -34; this is 35 points lower than this time last year.

The measure for the general economic situation of the country during the last 12 months is up three points at -69; this is 23 points lower than in October 2021.

Expectations for the general economic situation over the coming 12 months have improved by seven points to -61, although this is till 35 points lower than October 2021.

The Major Purchase Index is has fallen three points to -41; this is 31 points lower than this month last year.

The Savings Index is up two points this month at +13; this is nine points lower than this time last year.

For over 85 years, we have earned the trust of our clients around the world by solving critical business questions in their decision-making process around consumers, markets, brands and media. Our reliable data and insights, together with advanced AI capabilities, have revolutionized access to real-time actionable recommendations that drive marketing, sales and organizational effectiveness of our clients and partners. That’s how we promise and deliver “Growth from Knowledge”.