Nuremberg, June 29, 2017 – A third of people (34 percent) in an online survey of 17 countries firmly agree1 that they “find it difficult to take a break from technology (my mobile device, computer, TV, etc.), even when I know I should”. This compares to less than half that number (16 percent) who firmly disagree1 that it is difficult to take a break.

The findings from global research experts, GfK, show that, internationally, gender makes next to no difference in people’s struggle to turn off their devices or ‘unplug’ from technology, with nearly equal percentages of both men and women agreeing they find it difficult.

However, the different age groups and income groups show distinct differences in susceptibility to being ‘always on’.

Critically, the 50-59 and 60+ age groups are the tipping point, where there are higher percentages who firmly indicate they have no problem turning off their technology, than percentages saying they struggle to take a break.

China and the Americas have highest percentages who find taking a technology break difficult. Germans lead in finding it easy.

At country level, China (43 percent) has the highest percentage of online population who strongly agree that they find it difficult to break from technology. This is closely followed by the Latin American countries surveyed (Brazil 42 percent, Argentina 40 percent, Mexico 38 percent), with the USA coming fifth (31 percent).

On the other side, Germany has the highest percentage (35 percent) of online population who strongly disagree that taking a break from tech is difficult. This is followed by the Netherlands (30 percent), Belgium (28 percent) and Canada and Russia (both 27 percent).

GfK’s findings clearly show where the key markets lie at a number of levels – from brands offering the latest devices targeting happily ‘always-on’ consumers, to brands offering ‘quality time’ services that resonate with people who like to break from technology.

Download our complimentary "Break from technology" report showing findings by gender, age and income for each of the 17 countries. 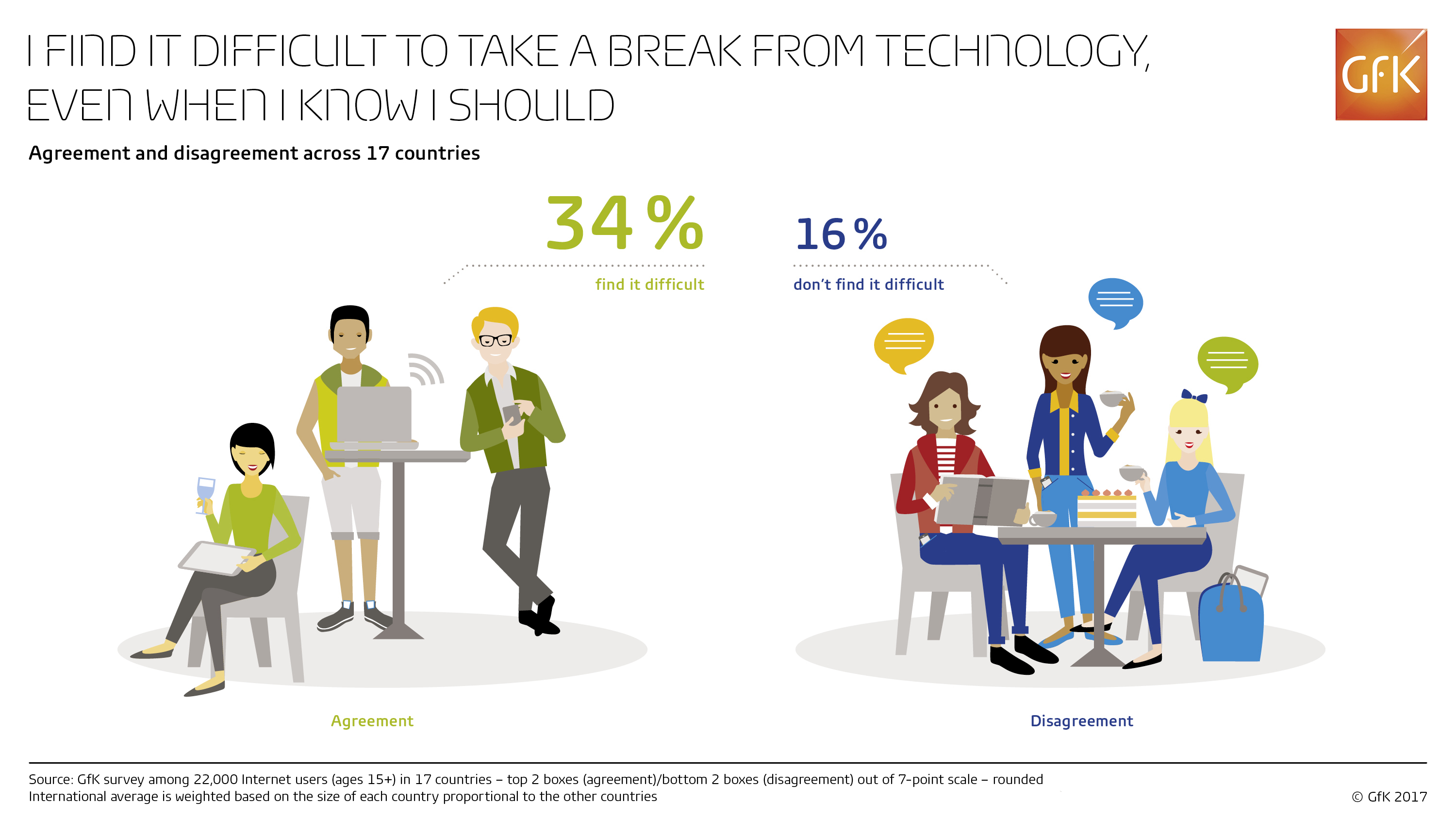 Difficulty in taking a break from technology - international overview 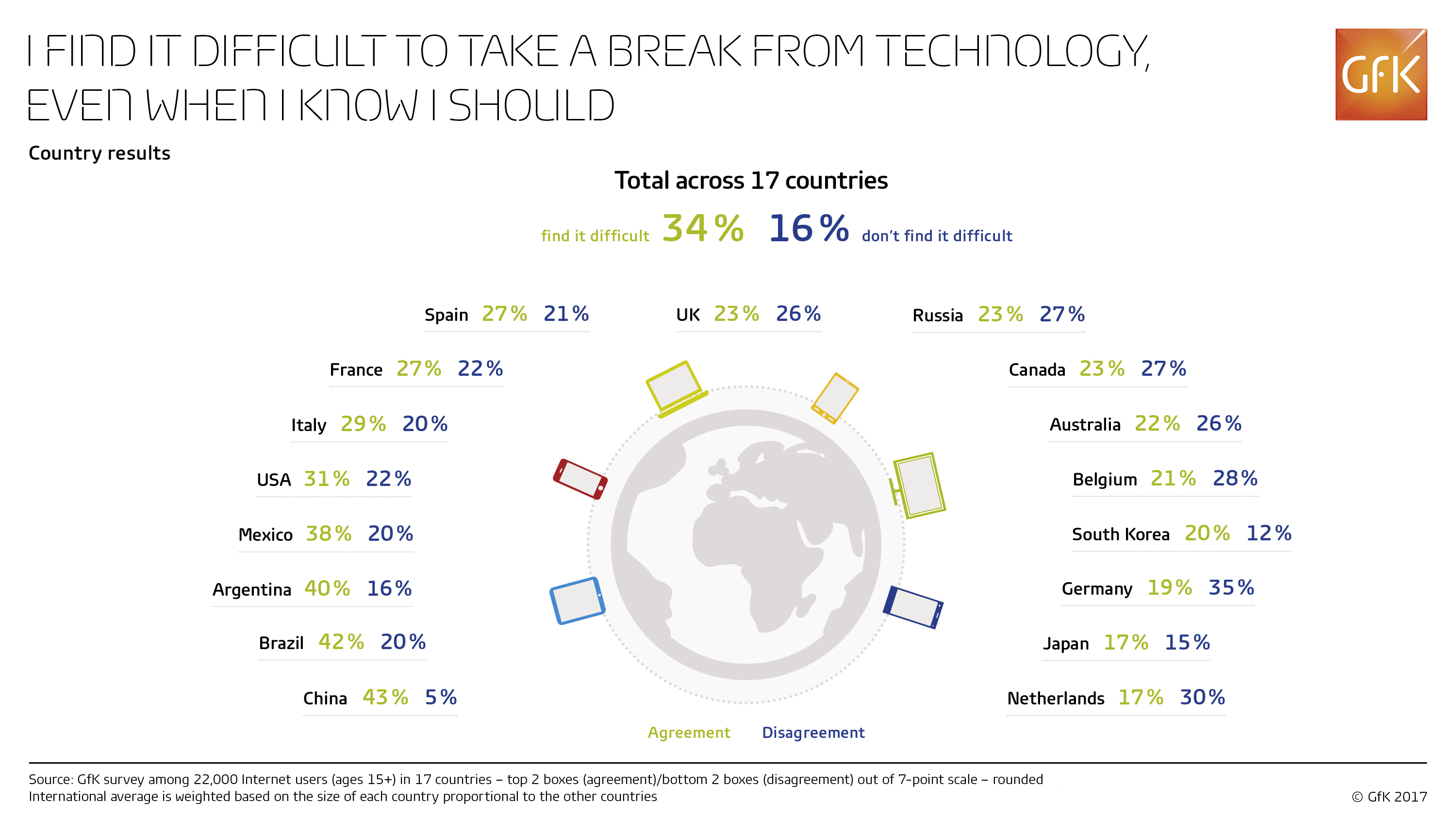 Difficulty in taking a break from technology - 17-country comparison

GfK asked over 22,000 consumers (aged 15 or over) online in 17 countries how strongly they agree or disagree with the statement, “I find it difficult to take a break from technology (my mobile device, computer, the TV, etc.), even when I know I should”

1Data presented in this release represents the bottom 2 boxes (disagreement) and top 2 boxes (agreement) from on a 7-point scale where “1” means “don’t agree at all”, and “7” means “agree completely”.

Fieldwork was completed in summer 2016. Data are weighted to reflect the demographic composition of the online population aged 15+ in each market. The global average given in this release is weighted based on the size of each country proportional to the other countries. Countries covered are Argentina, Australia, Belgium, Brazil, Canada, China, France, Germany, Italy, Japan, Mexico, Netherlands, Russia, South Korea, Spain, UK and USA.