People average 4 hours a week on personal grooming. What motivates them?

But what are the major (as opposed to minor) reasons that motivate people to try to look their best?

The most popular motivation, cited by 60 percent of the 27,000 people surveyed as a major reason for trying to look their best, is to feel good about themselves. This was followed by making a good impression on people they meet for the first time (44 percent) and setting a good example for their children (40 percent).

Men and women mirror each other in seeing these as the top three reasons for wanting to look good. But the number one reason - feeling good about themselves - resonates more strongly with women than men (67 percent, versus 52 percent), while making a good first impression and setting a good example for their children are cited by almost the same percentage of men as women.

For men, the 4th and 5th major reasons for trying to look their best have amorous connotations – namely, to please their spouse or partner and to make a good impression on people of the opposite sex or those they find attractive (37 and 36 percent respectively). By contrast, women are more motivated by the wish to express their individuality and because it makes them feel in control (equal at 40 percent each).

All age groups agree that feeling good about themselves is the leading major motivation for trying to their best. Unsurprisingly, for those aged under 30, making a good impression on people they meet for the first time, and making a good impression on people of the opposite sex or those they find attractive rank 2nd and 3rd as the major reasons for looking their best. For those aged 30 and above, setting a good example for their children is consistent across all age groups as the 2nd most commonly cited motivation. And when it comes to those aged 50 and over, pleasing their spouse or partner makes an appearance as their 3rd most popular major reason.

When it comes to time spent on personal grooming (bathing, shaving, dressing, hair, make-up), Italians are in the lead, spending just over five and a half hours per week on average. They are followed by Argentinians and Americans, who are equal with an average time of just over five and a quarter hours per week. At the other end of the scale, Chinese spend less than three hours per week on average, followed by South Koreans with just over three and a quarter hours and Japanese just over three and a half. 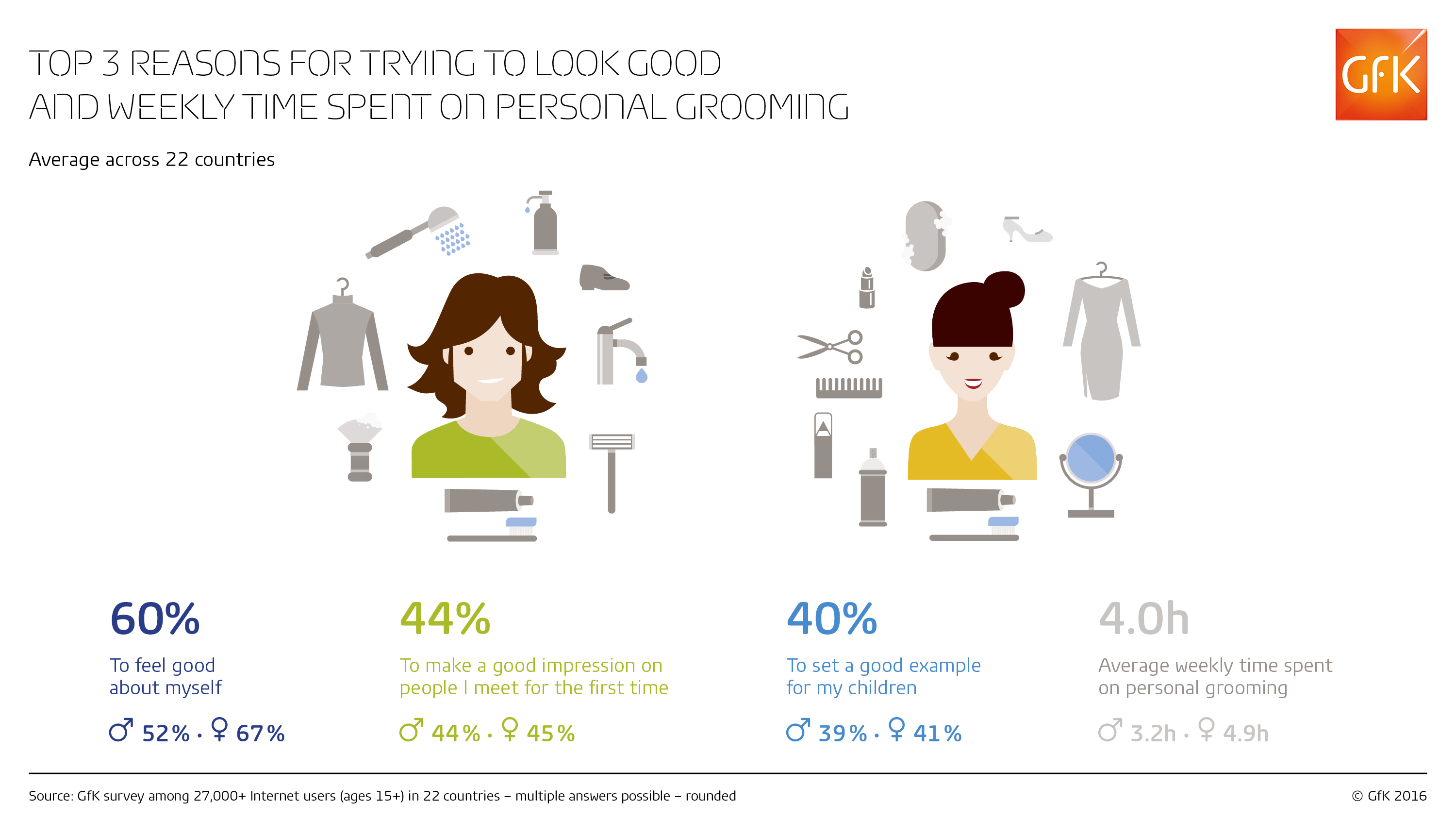 GfK conducted an online survey with over 27,000 consumers aged 15 or older in 22 countries. Fieldwork completed in June 2015 and the data are weighted to reflect the demographic composition of the online population age 15+ in each market.

1The survey question asked: “Here are the reasons some people have given for trying to look their best. For each one, please indicate if it is a major reason why you try to look your best: To feel good about myself / Because it is important for my career / Because it is expected of me / To be admired and respected by other people / To please my spouse or partner / To make a good impression on people whom I meet for the first time / To express my individuality / To set a good example for my children / To make a good impression on people of the opposite sex or those that I find attractive / Because it makes me feel in control