Nuremberg, May 25, 2017 – In an online survey just released by global research experts, GfK, three out of ten people (31 percent) would firmly* prefer to have more time than more money – compared to only nine percent who firmly* disagree with that. And over four out of ten (44 percent) firmly believe that experiences are more important than possession – compared to just three percent who firmly disagree with that.

This preference for more time over more money is especially important for people in China (41 percent), Brazil (37 percent) and Argentina (32 percent). And agreement with experiences being more important than possessions is highest in Mexico (57 percent), Argentina and the USA (both 53 percent).

Income plays a factor in consumers’ mindsets, but possibly not to the extent imagined.

There is only an eleven-percentage-point difference between those in high income households and those in low income households, when it comes to the numbers who would prefer to have more time than more money (38 percent versus 27 percent).

A similar picture is seen in people’s perception that experiences are more important than possessions. Half of people in high income households agree to this (50 percent) compared to 38 percent of those in low income households.

Money becomes relatively more important to those over 60

There are also some differences to be noted between different age groups. Internationally, those in their twenties and thirties have the highest percentage of any age group that would prefer more time to more money – standing at over a third (36 percent) each. And they also have the smallest percentage of those strongly disagreeing with that (7 percent each).

In contrast, for those aged 60 and over, there is a much tighter difference in the numbers favoring more time to more money (19 percent) versus those indicating they would rather have more money than more time (13 percent).

When looking at the perceived value of experiences versus possessions, age does not make a significant different in outlook. Those in their twenties are thirties are the most in favor of experiences over possessions, with 46 percent firmly agreeing with this, dropping to 40 percent for teenagers (15-19 year olds).

GfK’s findings clearly show market potential for brands that can associate themselves in consumers’ minds with giving quality time back into people’s lives, or with making daily tasks simpler and faster. Brands can also raise themselves above close competitors by identifying ways to turn their purchase process into more of an experience for the consumer.

It is, of course, important to look at how the results differ within each individual country – and this data is available in GfK’s complimentary report of findings for each of the 17 countries 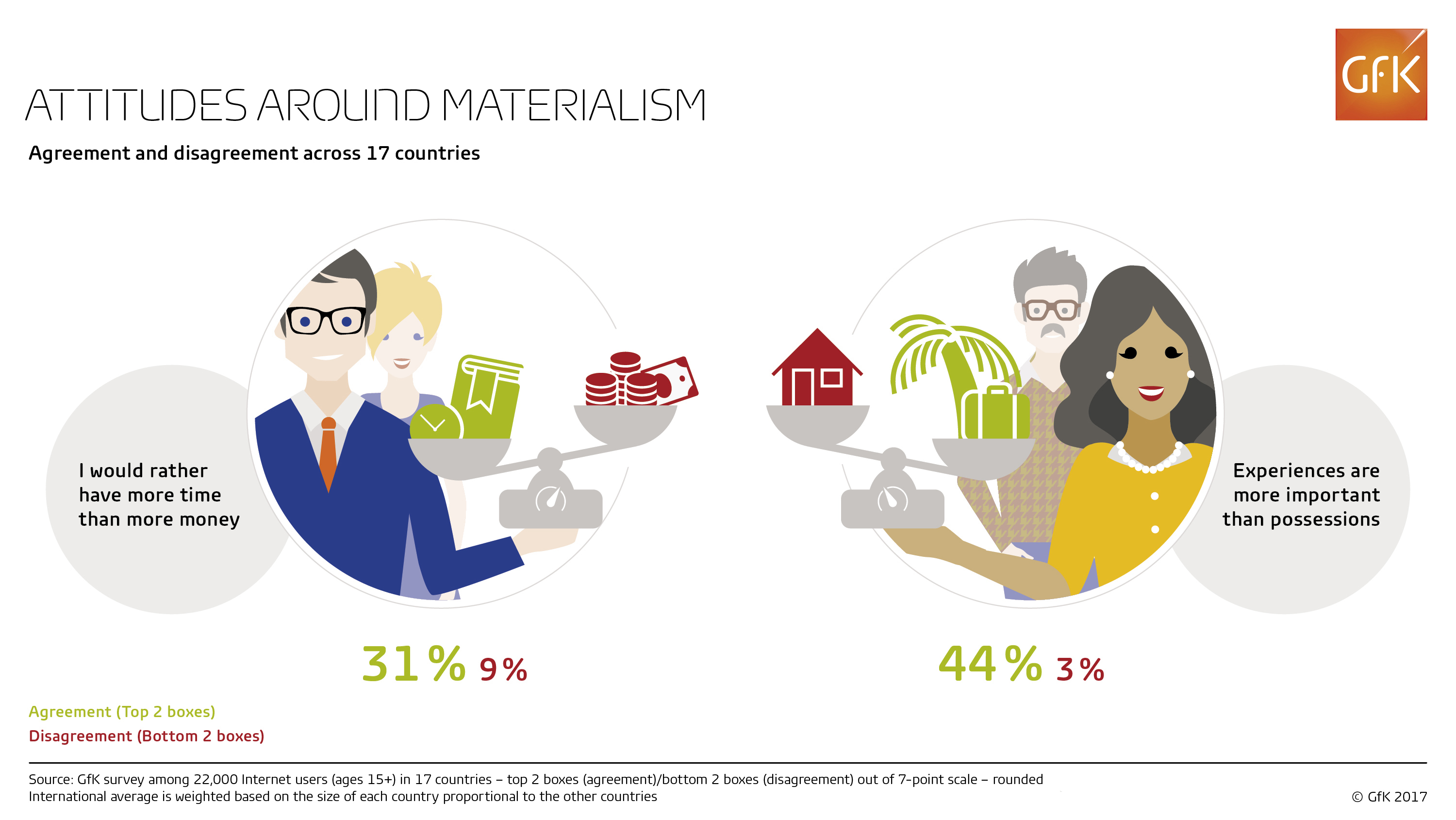 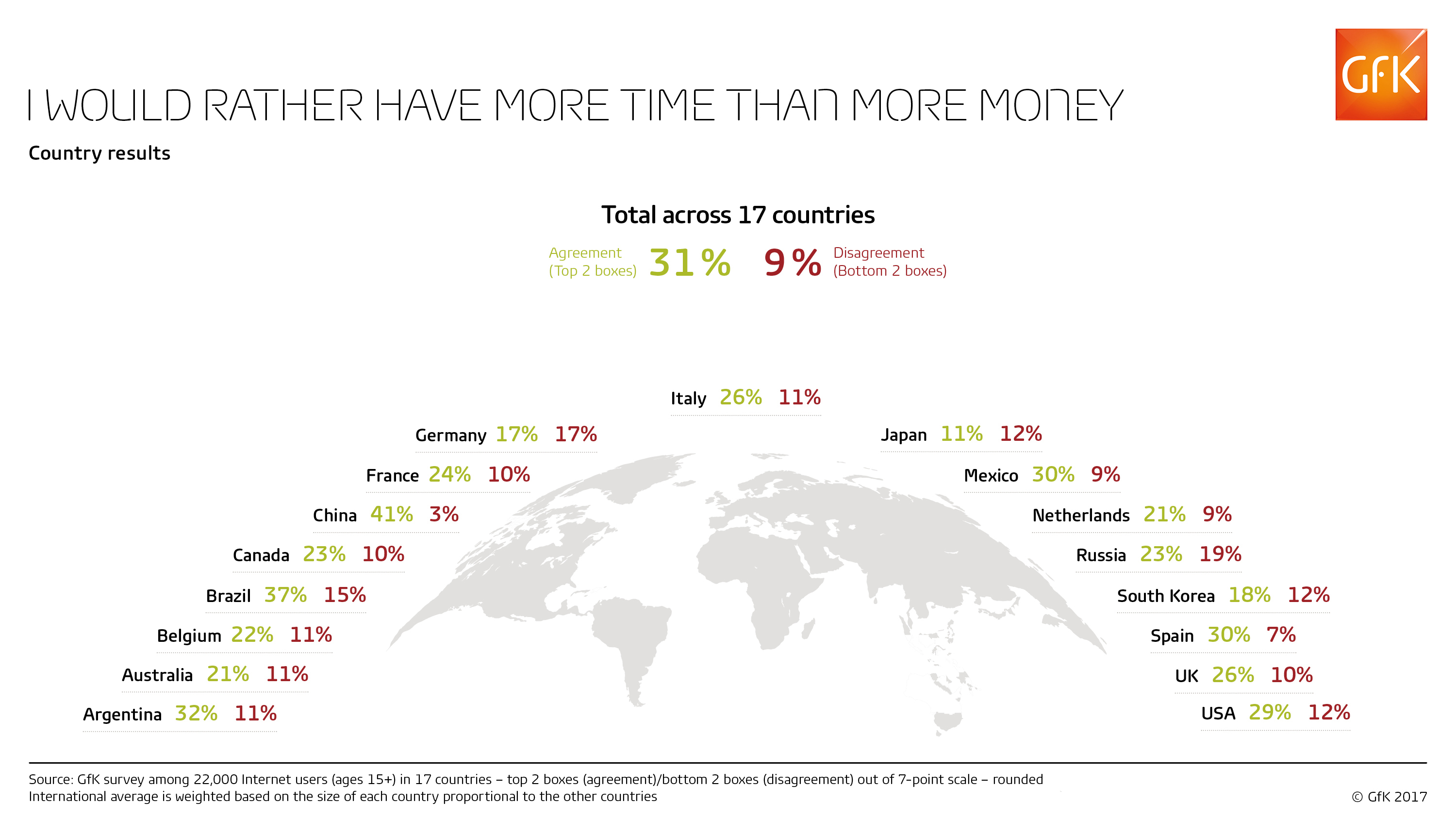 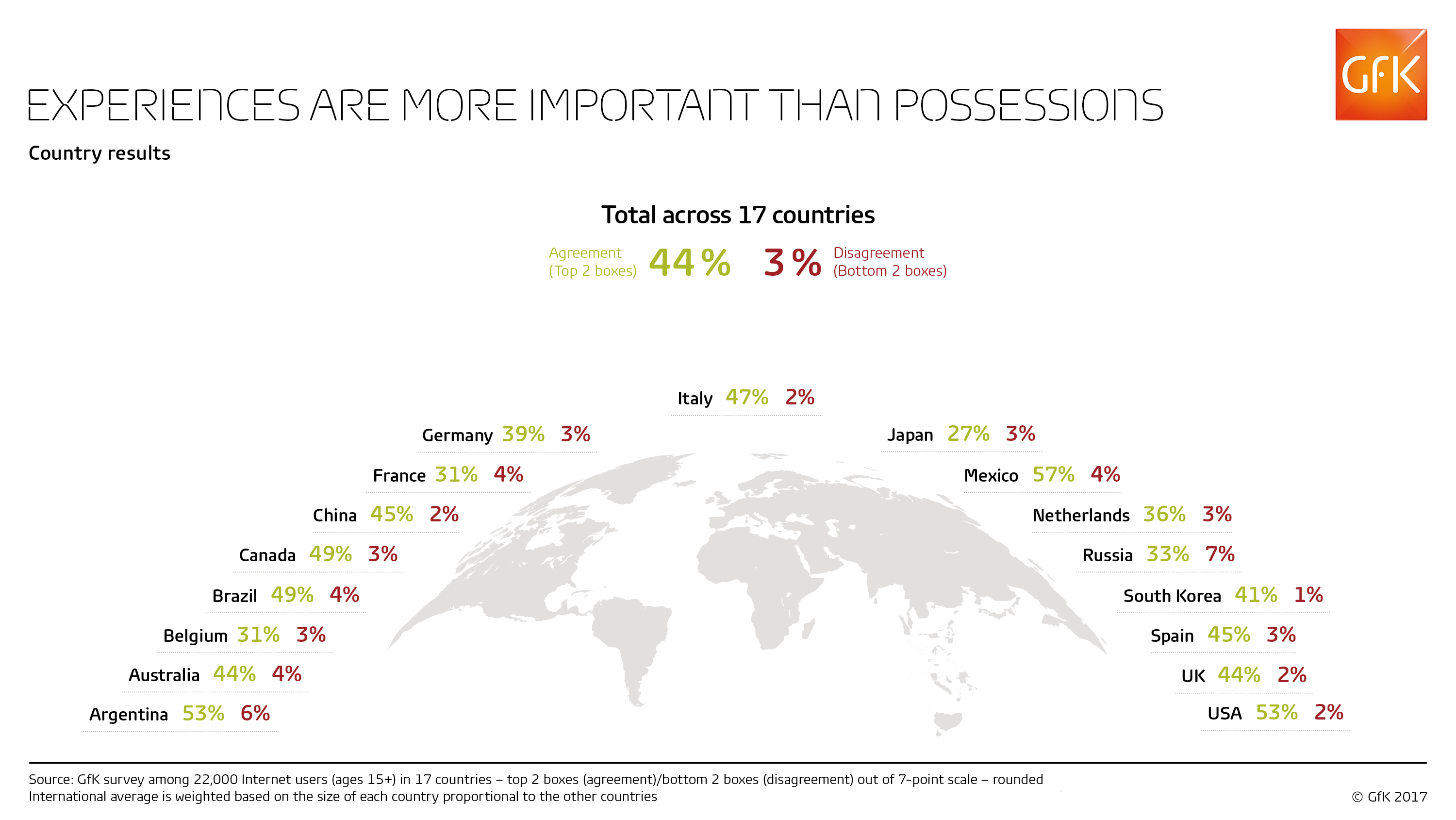 *All the data presented in this release represents the bottom 2 boxes (disagreement) and top 2 boxes (agreement) from on a 7-point scale where "1" means "disagree strongly" and "7" means "agree strongly.”

GfK conducted the online survey with over 22,000 consumers aged 15 or older across 17 countries. Fieldwork was completed in summer 2016. Data are weighted to reflect the demographic composition of the online population aged 15+ in each market. The global average given in this release is weighted based on the size of each country proportional to the other countries. Countries covered are Argentina, Australia, Belgium, Brazil, Canada, China, France, Germany, Italy, Japan, Mexico, Netherlands, Russia, South Korea, Spain, UK and USA.