GfK’s long-running Consumer Confidence Index has increased by six points this month to -1. All five measures used to calculate the Index saw increases.

“Optimism is returning to UK consumers following the dramatic collapse in confidence after the recent Brexit result. The six-point jump to -1 restores the Index to June’s pre-Brexit levels, driven by improved expectations in our personal financial situation, perceptions of the general economic situation and intentions to make major purchases. British consumers appear to have shrugged off Brexit fears about the economy as wages continue to grow faster than prices, rising employment boosts income, and low interest rates encourage people to spend rather than save as seen by improvements in the Major Purchase Index and low levels in the Savings Index. But will confidence continue to rise in coming months? Or are we seeing misplaced consumer optimism in which any kind of bad news – economic or political – sends the Index reeling once again?”
UK Consumer Confidence Measures – September 2016
The Overall Index Score has increased six points this month to -1. All measures used to calculate the index score went up.

Personal Financial Situation
The index measuring changes in personal finances during the last 12 months has increased by two points this month to +2; this is one point higher than September 2015.

The forecast for personal finances over the next 12 months has increased by three points this month to +7; this is one point higher than this time last year.

Expectations for the General Economic Situation over the next 12 months have increased 13 points to -9 this month; this is seven points lower than September 2015.

Savings Index
The Savings Index is six points higher this month at -9; which is 12 points lower than September 2015. 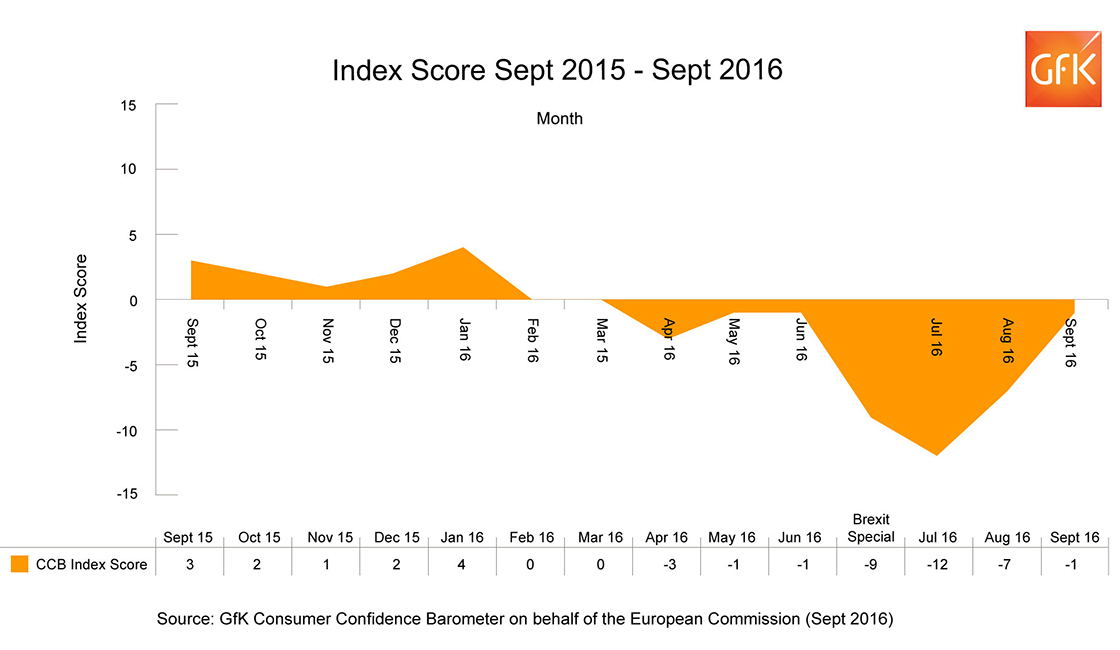