But consumers say they are not afraid to spend.

GfK’s long-running Consumer Confidence Index has decreased by two points this month to -3. Two of the measures in the Index saw increases and three of the measures saw decreases in October.

“Declining optimism about economic prospects for the wider UK economy has depressed the consumer mood this month. Despite the continuing feel-good factor arising from persistent low interest and inflation rates, sterling’s sharp decline is arguably stoking fears that price rises will hit UK living standards hard next year. However, views on the state of our personal financial situation for the past year and next continue to remain positive (when comparing with 2015 levels), underlining that we feel more optimistic about situations we can control. This month also continues the upward trend on spending intentions with high levels of agreement in the Major Purchase Index. This shows that many consumers agree now is the right time for people to spend. So, with Black Friday approaching and Christmas trading already underway, will the remainder of 2016 see halcyon days for retailing? Are we gearing up to shop now and pay later amid concerns over rising high street prices?”

The Overall Index Score has decreased two points this month to -3. Two of the measures saw increases in October, with the remaining three measures decreasing.

The index measuring changes in personal finances during the last 12 months has increased by one point this month to +3; this is one point lower than October 2015.

The forecast for personal finances over the next 12 months has decreased by one point this month to +6; this is the same level as last year.

The measure for the General Economic Situation of the country during the last 12 months has decreased three points this month to -19; this is 14 points lower than October 2015.

Expectations for the General Economic Situation over the next 12 months have decreased eight points to -17 this month; this is 13 points lower than October 2015.

The Major Purchase Index has increased five points this month to +14; this is seven points higher than this time last year.

The Savings Index has stayed at the same level in October at -9; this is 11 points lower than October 2016. 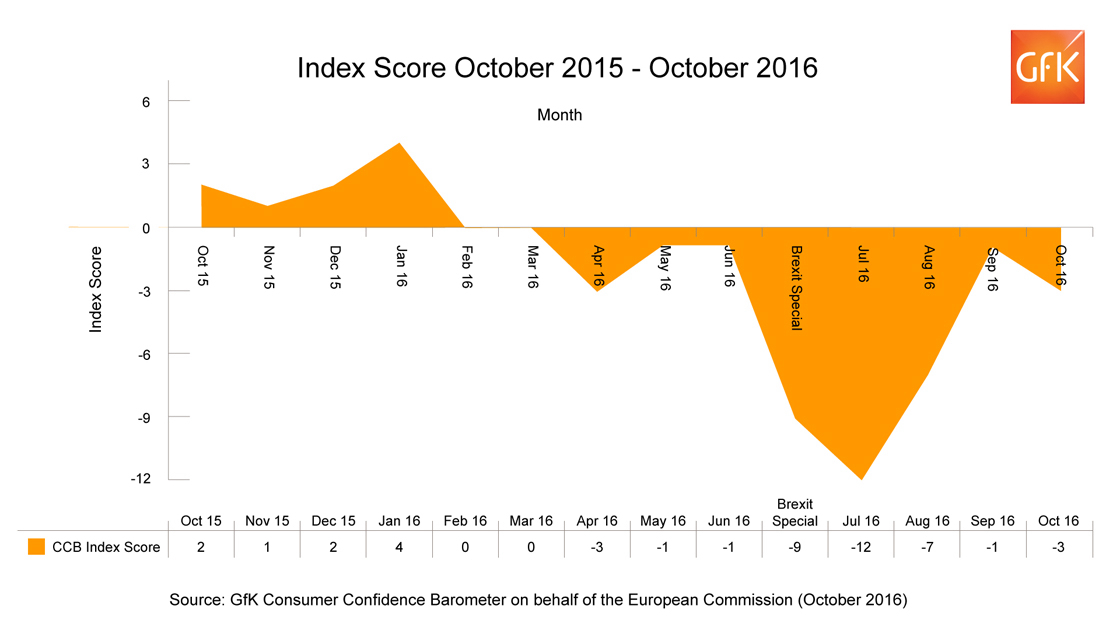