London, July 29, 2016 – GfK’s long-running monthly Consumer Confidence Index dropped 11 points in July (since the June interviews conducted before the Referendum) from -1 to -12. The survey dates back to 1974 and July sees the sharpest month-by-month drop for more than 26 years (March 1990). This is also a further 3-point drop from the -9 recorded by the Brexit Special in early July. All five measures used to calculate the Index saw decreases this month.

“Consumers in post-Brexit Britain are reporting higher levels of concern this month. We’ve seen a very significant drop in confidence, as is clear from the fall in each of our key measures, with the biggest decrease occurring in the outlook for the general economic situation in the next 12 months (-19 points). Although the rate of decline is slower than reported in the aftermath of the vote to leave the EU, consumers in the UK were also less optimistic about the state of their personal financial situation going forward (-9 points). However, the Index continues to remain at a relatively elevated level by historic standards. Its future trajectory depends on whether we enter a new period of damaging economic uncertainty or restore confidence by embracing a positive stance on negotiating a new deal for the UK.”

The Overall Index Score has dropped 11 points since June to -12 (this is a further 3 points down since the Brexit Special survey at the start of July).

The index measuring changes in personal finances during the last 12 months has decreased by seven points this month to -1; this is five points lower than July 2015.

The forecast for personal finances over the next 12 months is down by nine points this month to -1; this is seven points lower than this time last year.

The measure for the General Economic Situation of the country during the last 12 months has dropped 12 points this month to -25; this is 24 points lower than July 2015.

Expectations for the General Economic Situation over the next 12 months have decreased 19 points to -33 in July; this is 32 points lower than July 2015.

The Major Purchase Index has decreased 11 points this month to -2; this is 13 points lower than this time last year. 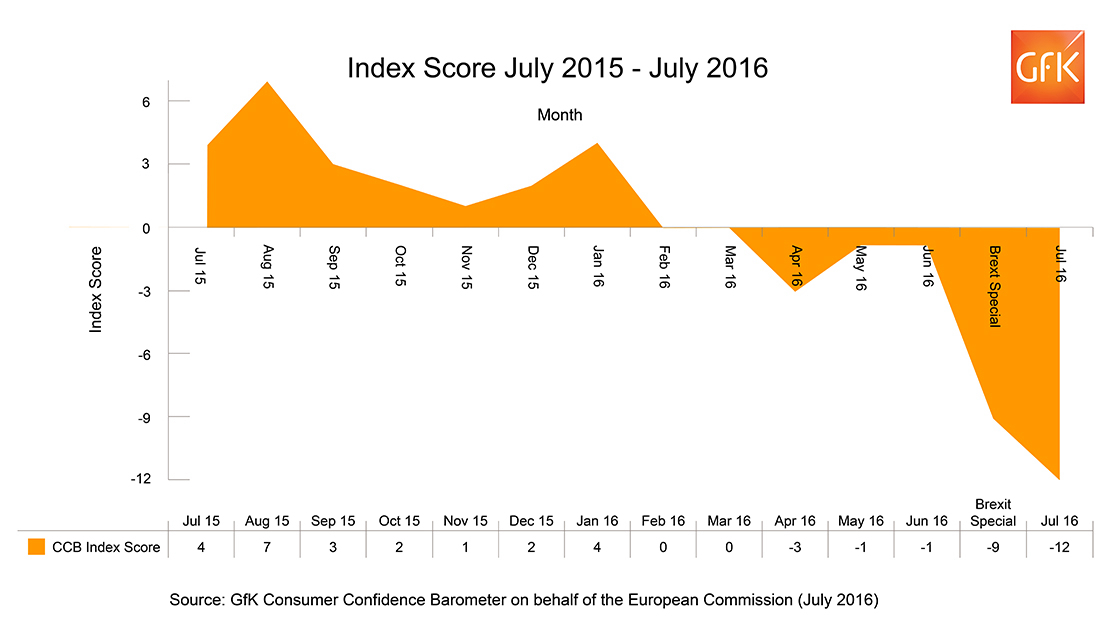