The video games of our lives | UK

Brand new analysis from GfK has revealed the UK’s top 30 best-selling games software titles since 1995 – and they tell a story about what has been entertaining us over the past 27 years too. Ranked in order of revenue generated, the top-grossing game is FIFA, followed by Call of Duty, and the Mario series. In total, the top 30 titles have earned £13bn in the last 27 years. 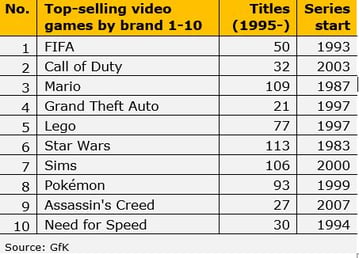 How to win at video games: The importance of regular releases

The coveted top two positions are taken by titles that have adopted an annual release strategy to keep fans engaged – and dipping into their pockets. FIFA publisher EA Sports has dropped at least one new FIFA game every year since the 1993 debut of FIFA International Soccer on Sega Megadrive. With 50 releases scored (29 in the main series), there was even a year with four distinct FIFA iterations (2006 saw FIFA Street 2, FIFA World Cup Germany 2006, FIFA 07, FIFA Manager 07). But since 2015 it has become one main series release per year. It’s the same strategy at the number two ranked Call of Duty franchise published by Activision, which first launched a full 10-years after FIFA’s first game, with 32 iterations and 19 annual releases in the main series. Launched on PC in 2003, the super-successful series’ high points are 2010’s Black Ops and 2011’s Modern Warfare 3.

At number three is Nintendo’s Mario franchise. Brit’s love affair with the loveable siblings began back in 1987. Mario and Luigi were a starting point for many of today’s older gamers, who fell in love with gaming playing classics such as Super Mario Land, Mario Kart 64, and Super Mario 64. The biggest revenue-spinners in this analysis are Mario Kart Wii, Mario Kart 8, and New Super Mario Bros. 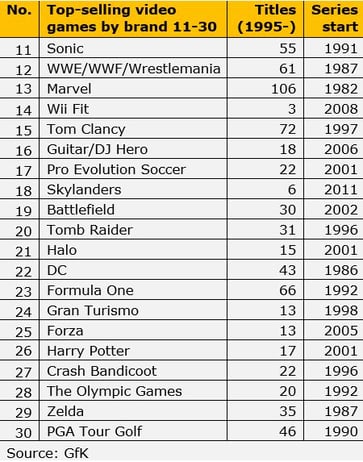 In fourth place, is Grand Theft Auto. Currently, at version V, this edition has garnered incredible success and has generated 40% of the franchise’s life sales since the title launched in 1997. A by-product of this much-loved game is that its British-based players have learned the layout of the downtown suburbs of LA, San Francisco, and Las Vegas – without boarding a plane!

Expanding the audience with wide-ranging titles

The 11 brands highlighted in the ranking are successful videogame brand extensions from outside the games industry, illustrating how successful the gaming industry has been at extending consumers’ passion for sports, movies, toys, comics, superheroes, and novels into computer games. From LEGO to DC, Star Wars to Harry Potter to Tom Clancy novels, these titles are designed to appeal to a wide-ranging audience – and they clearly do that very successfully. Add to those the sporting titles of FIFA, WWE/WWF/Wrestlemania, Formula One, The Olympic Games, PGA Tour Golf, which together have generated £2.8bn of revenue since 1995.

GfK’s Senior Client Insight Director for Gaming, Dorian Bloch says: “This is a fascinating list and anyone who has been following the development of the videogame industry as I have will no doubt show little surprise at the sheer value, size, and breadth of this market. What was once seen as a niche sector is now an unquestionably mainstream market generating billions in revenue annually. The characters in these games have become much-loved heroes, from Lara Croft to Luigi and Mario, to Sonic the Hedgehog. Terms used in the franchises have entered our vocabulary, and there are more than a few gamers who could navigate their way around the outskirts of San Francisco from their time at the wheel of a stolen car in GTA.”

Methodology
The methodology for the analysis in this press release is based on POS (point of sale) tracking of console and PC games revenue data from a comprehensive list of traditional retailers in the UK. This includes games specialists, supermarkets, online pure players and technical superstores, department stores, and consumer electronics retailers. Around 42,000 games (unique SKU’s/formats) were tracked over 27 years, spanning five generations of hardware from Playstation 1-5 console systems to Microsoft Xbox, Xbox360, Xbox One, Xbox Series and Nintendo N64, Gamecube, Wii, Wii-U, Switch, plus PC gaming and hand-held consoles.

The start date shown for each brand sometimes pre-dates the period of tracking (1995-2021). In general, an earlier start date tracks the origin of early arcade systems/8-bit consoles and 8-bit computers.

GfK. Growth from Knowledge.
For over 85 years, we have earned the trust of our clients around the world by supporting them in business-critical decision-making processes around consumers, markets, brands, and media. Our reliable data and insights, together with advanced AI capabilities, have revolutionized access to real-time, actionable recommendations that drive marketing, sales and organizational effectiveness of our clients and partners. That’s how we promise and deliver Growth from Knowledge.