Mobile World Congress 2017 highlighted a potential shift in the UK mobile market brand and model landscape. With the absence of a Galaxy flagship announcement in 2017 other players were able to take the limelight during the Barcelona event. While much can be said about competitor premium device launches, a number of devices have been announced by brands less established in the UK mobile market and at the lower price points. What will the impact of these launches be, and can they challenge the established landscape of premium, household name branded devices?

2016 was an eventful year, and the mobile market was not exempt from this. UK handset volumes declined by around 5% against 2015. A sixth successive annual sales decline for the market. When looking at handset pricing, the market value grew an impressive 25% despite the overall volume decline. Handset selling prices are on the rise. Smartphones accounted for almost 90% of handset sales in 2016.

The contract handset market reached its highest ever average selling price in October 2016. Meanwhile the March release of GfK’s long running Consumer Confidence Barometer revealed 76% of consumers expect prices to rise over the next 12 months. This metric has grown considerably since the EU referendum result in June and hints at an opportunity for mid-tier brands and devices to capitalise on a more price aware consumer.

Are mobile consumers becoming more price conscious?
The contract sim market is in a lengthy period of high volume growth, and has experienced an annual decline in just 1 month since March 2015. Meanwhile the sim free market has registered similar growths and accounted for around 15% of smartphone sales in 2016. These growth areas of the UK market show a clear increasing consumer demand for purchase flexibility and the growing dynamic of price savvy consumers paring sim tariffs with sim free handsets, as well as people hanging on to their handsets for longer.

The online channel is a key driver of many tech market growths, and a recent GfK consumer panel study showed that 50% of consumers use the online channel to “save money”. GfK’s technology purchase journey data shows a strong link between OEM, retailer and tech review websites suggesting a high level of device research. Many dynamics suggest a growing trend of a more informed and price aware mobile consumer, not least the large volume growths seen within GfK weekly data at key promotional periods in 2016.

What is in store for 2017?
It is difficult to foresee the future without a crystal ball however there is unquestionable growth potential for the mid-tier price points. In 2016 around 15% of smartphones were sold with a RRP of £250 – 400, and just 10% in the £150 – 250 price bracket. However 2017 will see well-known UK mobile brands, as well as the less familiar, launching devices into the space in 2017 with good specs to consumers that could be hunting for valued devices. Meanwhile old generation flagship longevity is on the rise causing familiar, once premium device to be price eroded. Brand portfolios are being continually expanded with non-flagship series launching towards the lower price points.

The mid-tier will very soon become a crowded space and a competitive one for brands with consumers attaining the choice and flexibility they desire. The question is will this disrupt the longstanding UK mobile market landscape of brand and premium device dominance? While sim free handset device sales are on the rise, contract tariff subsidisation offerings will remain prominent in the UK and continue to present a barrier for mid-tier devices to capitalise on their value offerings.

Finance plans enabling staggered payments are also becoming more ingrained in the UK market making premium flagship devices a more affordable proposition. However with flagship handset prices anticipated to rise as a result of component price increase and Sterling erosion, there are certainly interesting times ahead for the mid-tier price point. 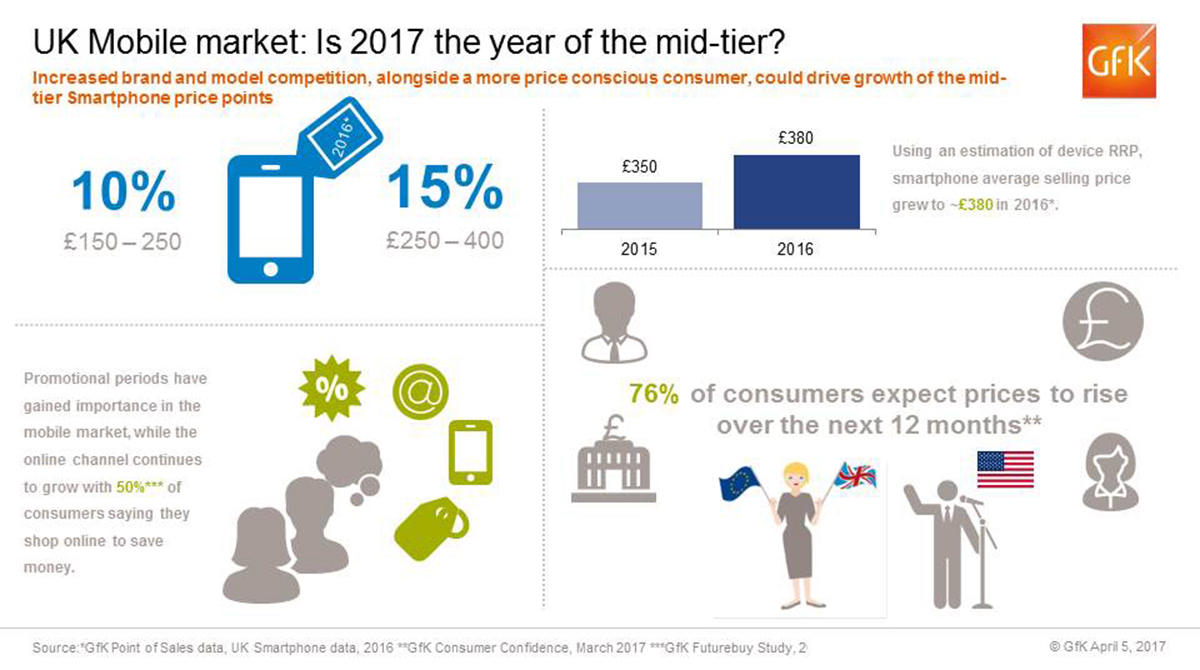