Health and fitness – a January fling?

Every year in January the word “gym membership” peaks in number of searches on Google and the gyms across the UK are filled with people determined to start a new, healthier life. GfK data shows that health and fitness is not just a January fling but is instead becoming a key feature of our general lifestyles.

Actually 63 percent of global consumers say health and fitness (making an effort to be in good physical and mental shape) is an extremely important value.  This value has increased with 6 points since 2011, indicating there’s a shift going on, and looking more closely at the Google data we find not just January spikes but a constant increase over the past years. Okay, so many of us sign up to the gym in January but don’t most of us quit? Surprisingly no, gym memberships were on an all-time high in 2016 with one in seven UK adults owning one, and this number has seen an increase every year since 2008.

Furthermore activewear available in every other supermarket, health and fitness apps to help out in any situation of your day (wake-up morning yoga, tube mindfulness, clean eating tips for lunch, gym inspiration) and all-knowing, now even analysing your sweat for DNA, wearables are the new norm.

This shift in consumer behaviour was picked up by everyone from Beyoncé (creating her own activewear line in collaboration with Topshop) to Sainsbury’s (launching their Tu athleisure range) last year. The list of brands expanding into activewear are endless, among the first were H&M, Primark and Net-a-Sporter soon followed by Zara, Lidl, Ted Baker, Missguided, River Island, Kate Spade and Jack Wills to mention a few.

However what we find in our data is that yes the interest for health and fitness are booming, and yes people do know what to do to stay healthy, but still many struggles to follow-through. For example 71 percent of consumers state they think getting a good night’s sleep is very important but only 41 percent state that they get a good night’s sleep often. 34 percent think taking steps to minimise stress is very important but only 14 percent actually do so.

Maybe the ocean of health and fitness wearables that allow closer monitoring of sleep, activity and wellbeing provide a solution and help us all to actually do all the things we’re supposed to. Wearables such as health and fitness trackers (e.g. Fitbit, Garmin, Misfit) and smart watches (e.g. Apple, Samsung, Sony) have had an impressive growth since launch. Wearables had an 80 percent growth rate in 2016 compared to 2015, benefiting from strong internet sales (two thirds were bought online during November alone as Black Friday helped boost pre-Xmas sales).

Furthermore it’s not just wearables that capture our daily fitness metrics, there’s also a wide range of apps keeping track of us. Looking at apps connected to health and fitness we see an increase in net reach (percentage of UK online population using a fitness app app) over the past year indicating it’s more to it than just a temporary January craze. While the major social media apps  had an average growth in net reach last year of approx. 10 percent, major apps with a focus on health and fitness  saw an average increase of approx. 200 percent.

What all this suggests is that a new group of people are looking to enter the health and fitness world by purchasing activewear, wearables and apps. Retailers need to prepare so not to miss out.  A good start would be viewing peoples intensified focus on health and fitness as a major shift and not as a January fling that is going away anytime soon. 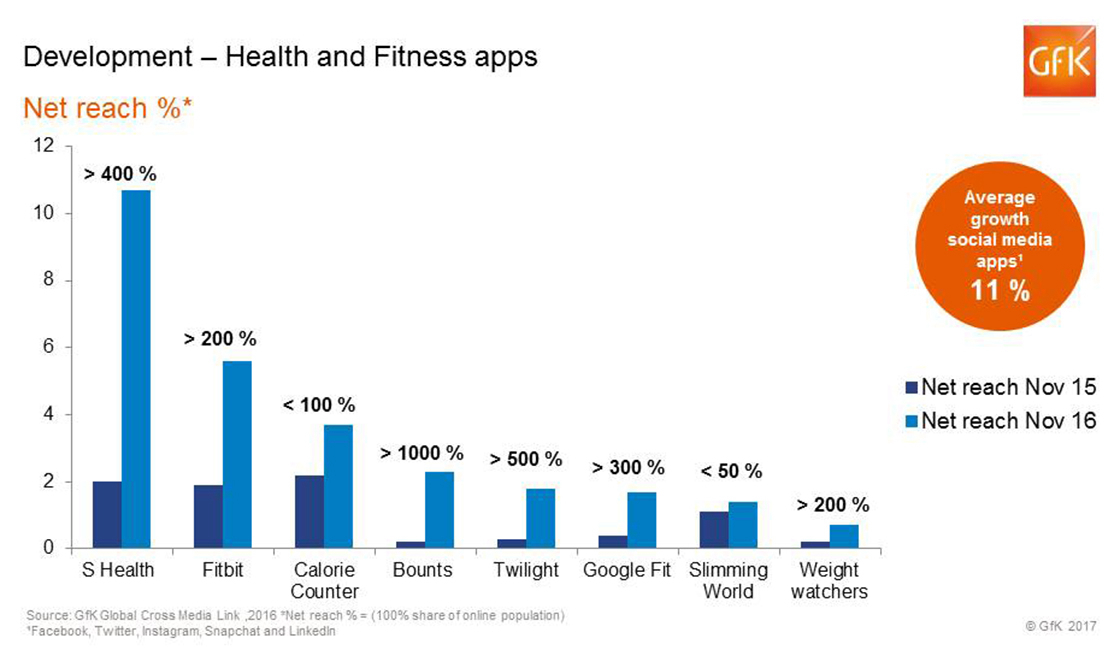