COVID-19: Impact on UK retail so far – and what we can learn from China

As urgency buying starts to fall off, we look at the changes in the UK's buying patterns for consumer goods throughout March, and looks at the pattern seen in China for when things might get back to normal..

Even as we entered 2020, consumer goods retailers were not having an easy time. Across Britain, people were spending their money more on experiences - socialising, going out and travelling – and, when they did buy ‘things’, it was fewer but higher priced items. By the end February, total spend on durables was down 1.5% in value and 3.4% in volume compared to last year.

That changed dramatically in mid-March as Britain headed into lock-down. In the two weeks prior to lock down, people were spending considerably more than they normally would at this time of year, with huge jumps in ‘urgency purchases’ of key items people consider essential for a long stay indoors.

In the week ending 21st March, purchases of chest freezers had leapt +855% in value growth, and upright freezers +556%, compared to the same period last year, as people set themselves up for stock-piling food. IT monitors shot up +360%, laptops and notebooks +230%, keyboards +220%, and mice +140%, to enable employees and students to work from home. And, on the entertainment side, TV sales jumped +101%, while garden play (including playhouses) shot up +223%, and decorating equipment and paint went up +104% and +147% respectively.  Additionally, purchases of hair clippers increased +161%, no doubt leading to some interesting home hairstyles.

By the final week of March, we were already seeing these growth areas dropping off for total sales, despite online channels continuing their strong relative growth. This is likely to increase over the coming weeks, now that non-essential retailers have been forced to close physical stores, the Government is strengthening enforcement of not leaving home unnecessarily, and people start to settle into the new norm.

For example, during 22-28 March, purchases of paint dropped to +17% overall compared to the same week last year. But when we look at just the online channels, paint sales here have rocketed by +514% as people switch to ordering everything online that they would normally buy in person.

How long will the impact on consumer purchases last? Can we learn from China?

China managed to get back to 75% of their usual retail sales within 8 weeks, and saw continued online growth in some areas throughout the peak crisis. However, the UK government’s strategy to ‘flatten the curve’ may mean the impact of lock-down on normal purchasing behaviour will last longer here.

The focus for traditional retailers has to be on switching as fast as possible to online sales. People still want to buy the brands they trust, but the challenge is finding these online and in stock. 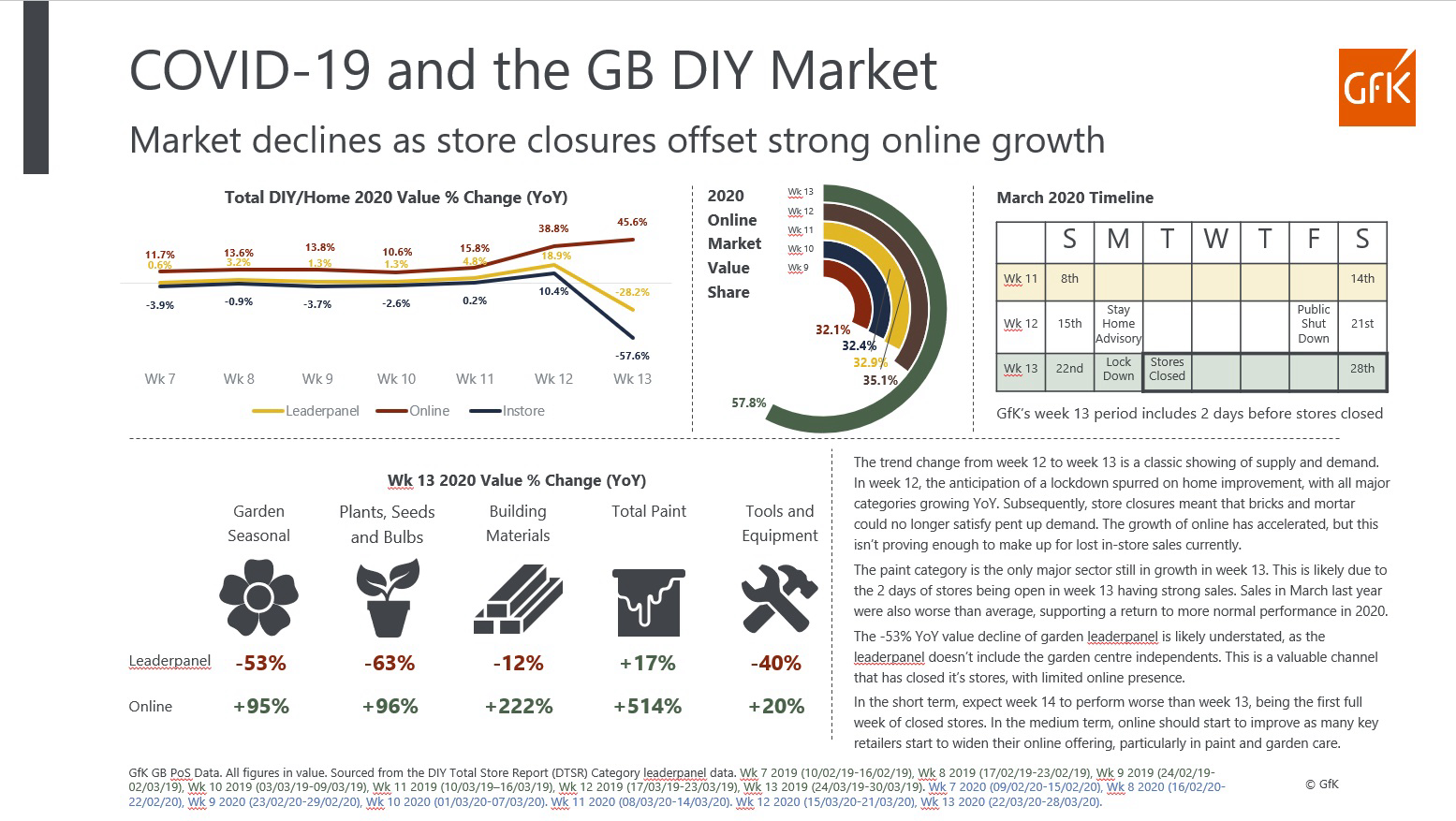 Purchases of DIY and Garden products in Great Britain, week 13