The rise of Black Friday in the UK over the past few years has been staggering. The US-imported sales frenzy has radically altered the composition of our traditional peak period, pulling an increasing number of sales from both sides of Black Friday. Since arriving on our shores, the event has grown considerably and is now the single most important sales week of the year for the Consumer Electronics market.

In addition to increasing in scale, the nature of Black Friday has also changed substantially. With a growing number of retailers participating in Black Friday, the event has stretched from a single day mania to a more structured weeklong event, complete with countdowns until new offers to sustain engagement.

In tandem with this growing focus from retailers, manufacturers have also been more proactive in their Black Friday activities. There has been a shift in focus away from clearing older stock towards Black Friday becoming a key promotional period for in-demand products. Indeed, own label and exclusive brands made up almost 10% less of the Consumer Electronics market value for Black Friday 2016 than in 2015 , with well-known brands taking a much greater share of sales value.

From a product perspective, too, Black Friday is becoming increasingly centred on sought-after items, rather than products nearing the end of their lifecycle. In the Consumer Electronics market, the three highest-growth items for Black Friday 2016, when compared to Black Friday 2015, were Turntables, Smart Audio devices and 60”+ TVs, all of which are still in strong growth now.

While it remains unclear whether Black Friday 2017 will outdo its 2016 counterpart, it is clear that this crucial sales period is not going away any time soon. With Black Friday week now accounting for such a high value of sales, the key challenge for manufacturers and retailers alike is to make sure that they are well prepared to make a success of Black Friday, or otherwise risk their wider Q4 performance. 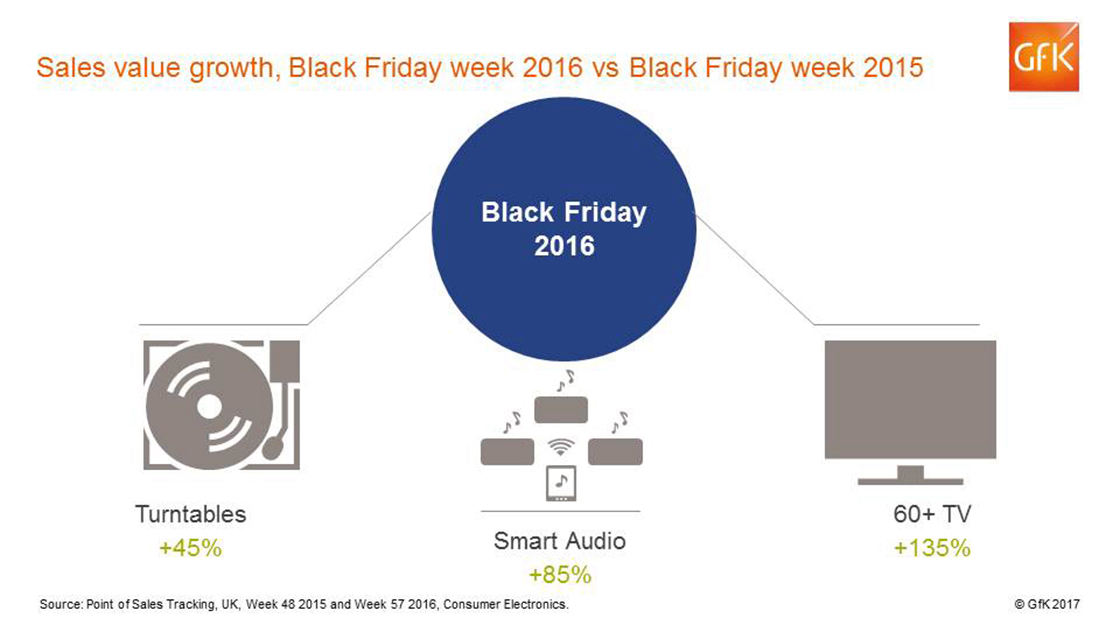